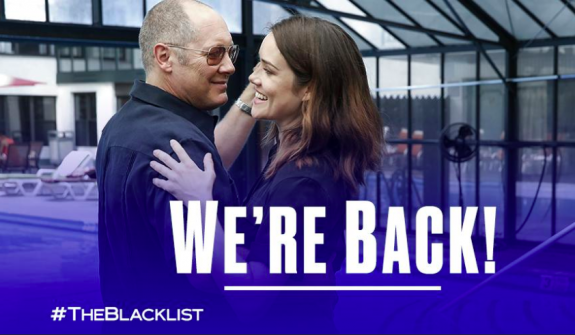 Blacklist Season 7 spoilers indicate that Katarina Rostova (Laila Robins) might know or at least hold the key to finding out the answer to Raymond Reddington (James Spader) and his real identity. Katarina is most definitely well and alive and living a low-key life in Paris. Here’s what you need to know.

After learning about her whereabouts, Red went to go visit her, but wasn’t prepared for what happened next. Katarina stabbed Red in the back after they shared a passionate kiss. She then took matters into her own hands and abducted him. There’s now speculation that this move might be connected to his real identity.

Blacklist executive producers John Bokenkamp and John Eisendrath have both teased that the previous season’s cliffhanger might be connected to Red’s mysterious and true personality. In other words, a lot of questions will finally be answered.

During Blacklist Season 6, Red was seen talking to a mysterious person on a bench. Apparently, Dominic (Brian Dennehy) told Elizabeth Keen (Megan Boone) a story about Red that wasn’t true. But fans already knew that.

When asked just how concerned fans should be about Red’s safety now that he’s in the hands of Katarina, Eisendrath told Entertainment Weekly in an interview, “It’s always fun to see how Red sort of tries to wiggle himself out of these dangerous situations and this will be a seismic one. However, I think just the mere fact that Katarina is there and has betrayed him and what she represents, I think is probably far more dangerous than the physical peril that Red’s in at the end of season 6.”

If he goes down, then so do you. pic.twitter.com/WmKA1hX9we

Eisdendrath also hinted that fans will be getting more of a backstory of Liz and Katarina’s relationship. We might also see Liz act more like a mother. He added, “Katarina’s presence will definitely impact Liz and Liz’s family life. In terms of how it impacts them going forward, we have yet to completely figure out, to be completely honest.”

Needless to say, fans will have to tune in to Blacklist Season 7 to find out what will happen next! The series will return this fall on the NBC network.