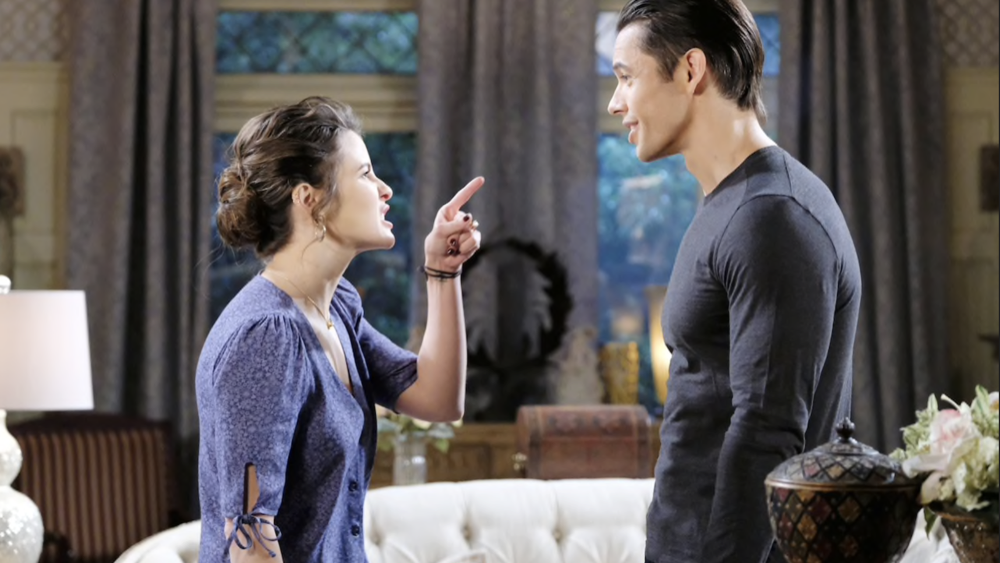 Days of Our Lives spoilers for Monday, June 10 through Friday, June 14 tease that “the bunnies continue to boil” as Tripp Dalton (Lucas Adams) and Haley Chen (Thia Megia) are trapped in the burning Horton cabin thanks to Claire Brady, (Olivia Rose Keegan) who misunderstood that Tripp and Haley had run away together instead of JJ Deveraux (Casey Moss) and Haley.

Last week’s Days of Our Lives weekly promo showed Tripp and Haley unconscious in the burning cabin, and Days of Our Lives viewers will see this on Monday’s episode, as Ben Weston (Robert Scott Wilson) rushes to Smith’s Island in an attempt to prevent a tragedy, but finds the cabin on fire! Eli Grant (Lamon Archey) and other first responders are also on the way and Tripp and Haley will be rescued.

DOOL Weekly Spoilers: Ben Weston’s In The Wrong Place At The Wrong Time

Tuesday, Ben is in the wrong place at the wrong time as Eli, who reached the cabin with other first responders in time to save Tripp and Haley, sees Ben find the lighter that Claire used to start the fire and assumes Ben set it because he’s got it in his hand! Meanwhile, back in Salem, Will Horton (Chandler Massey) and Sonny Kiriakis (Freddie Smith) vow to make the most of the moments they have left, and get engaged, and excitedly tell Gabi Hernandez (Camilla Banus) about the engagement and their gift from Julie Williams (Susan Seaforth Hayes) of two tickets for a cruise around the world! Eli also takes Haley and Tripp into custody and arrests Ben.

Days Of Our Lives Spoilers: Will Eve Lose Her Job When Ciara Exposes Her For Framing Ben?

Days of Our Lives Spoilers: Nicole Walker Wants Her Job Back

Thursday, Nicole Walker (Adrienne Zucker) also convinces Stefan to give her a job, reviving Basic Black, the company that was founded by John Black (Drake Hogestyn) and bought out and liquidated by Stefan. Meanwhile, Xander Kiriakis (Paul Telfer) tries to impress Sarah Horton (Linsey Godfrey) by swooping in to save the day.

Friday, Ted Laurent (Gilles Marini) tells a shocking secret to Nicole, not realizing she’s really Kristen DiMera (Stacy Haiduk) in a mask, probably sealing his own doom by telling her Holly Jonas (Scarlett and Harlow Mallory) didn’t really die in the crash. Xander completes his Superman moves on Sarah by handing over Dr. Wilhelm Rolf’s (William Utay) diary, hopefully containing something she and Will’s care team can use to cure his brain tumor, and JJ says a sad goodbye to Haley, who’s ready to be deported.