EastEnders: Adam Plays With Habiba’s Feelings By Changing His Mind After Ending Their Affair 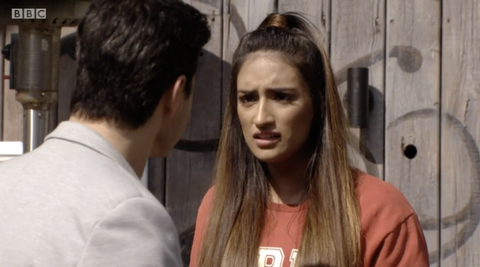 On “EastEnders,” Adam Bateman (Stephen Rahman-Hughes) is continuing to play with Habiba Ahmen’s (Rukku Nahar) feelings when he agreed to continue their affair after initially deciding to end it.

Habiba didn’t heed her sister’s warning to stay away from Adam. Before the last episode ended, the pair were seen getting back together and sharing a passionate kiss, leaving viewers to wonder how long their affair will last.

It all started when Habiba tried to convince Adam to leave Honey Mitchell (Emma Barton), to which he responded that it wasn’t the right time.

Meanwhile, Honey was preparing to move in with Adam despite Billy Mitchell’s (Perry Fenwick) warning.

Later, Adam told her about a meeting with a school governor at The Vic but she was left distracted when she saw Habiba looking upset. When she asked him about Habiba, Adam managed to avoid the topic. He then decided to end things with Habiba, who rushed to her sister for support.

During Adam’s meeting at The Vic, Iqra confronted Adam and told him to stay away from her sister. However, he’s having none of it as the pair met up again and that’s when he gave in to Habiba’s pleas to continue their secret relationship.

Habiba revealed her affair with the handsome dentist last month. They’ve known each other for some time as Adam was fostered by Habiba’s grandparents, who had no clue that Habiba and Iqra were staying in their house. When Mariam Ahmed (Indira Joshi) and Arshad Ahmed (Madhav Sharma) came home unexpectedly, Adam covered for them and told them he let them in.

Lola Pearce (Danielle Harold) knew that Habiba and Adam were having an affair. Billy plans to use this secret to win back Adam’s partner Honey, but she refuses to believe it and said that Adam thinks of Habiba as a sister. Iqra then managed to put things together and warned her sister that Adam may not have genuine feelings for her.

Will Habiba find a way to break up Adam and Honey? Can she really trust Adam? When will Honey find out about Adam and Habiba’s affair?