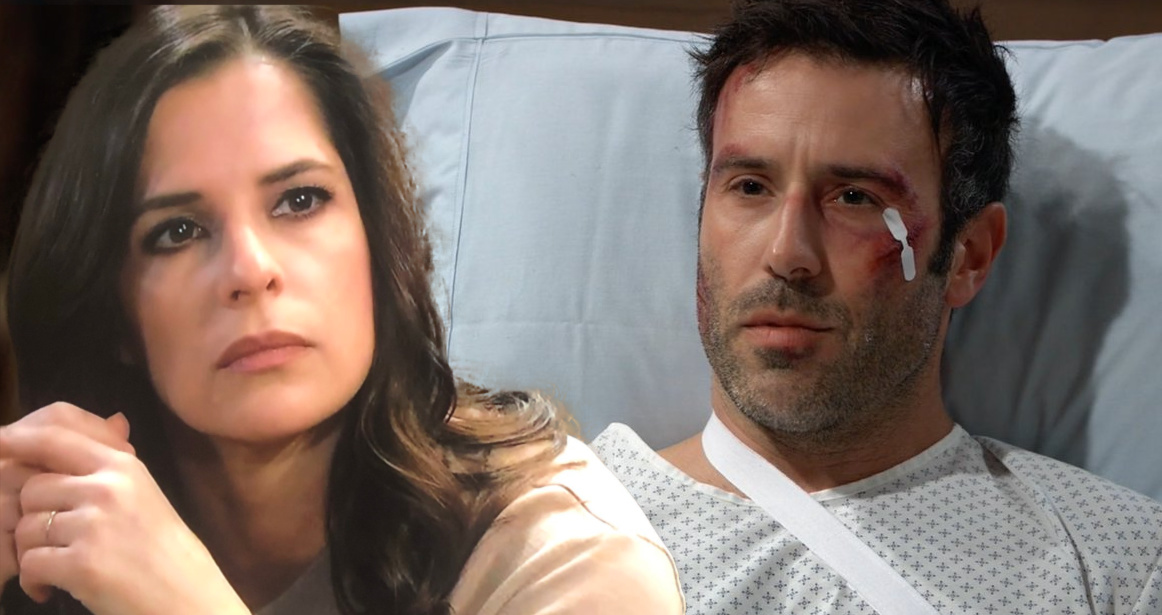 Monday, Shiloh Archer (Coby Ryan McLaughlin) turns on the charm. It looks like he’s trying to get information from his hospital bed about how to go about getting a birth certificate, probably from an unsuspecting General Hospital nurse. Of course, as General Hospital viewers know, he’ll be trying to track down his son with Willow Tait (Katelyn MacMullen).

Meanwhile, Carly Corinthos (Laura Wright) meets with her adoptive brother, Lucas Jones (Ryan Carnes). Previews show that one thing she will discuss is warning him not to have anything to do with his birth father, Julian Jerome (William DeVry), going by the opinions of her husband, Sonny Corinthos (Maurice Benard) and Julian’s ex-wife, Alexis Davis (Nancy Lee Grahn) both of who are biased to say the least against Julian!

Tuesday, Shiloh taunts Sam McCall (Kelly Monaco) who was a big part of why he’s laying handcuffed to a hospital bed, to begin with; he will likely show himself for the arrogant, entitled rich man’s son he grew up as, telling her that nothing she’s done or found evidence of will stick in court, even though he doesn’t have Margaux Dawson (Elizabeth Hendrickson) in his court, having resigned as DA after setting up a strong case against him! Meanwhile, Detective Harrison Chase (Josh Swickard) is shocked to learn that Harmony Miller, (Inga Cadranel) the head of the Beechers Corners Dawn of Day, is Willow’s mother!

Wednesday, Jordan Ashford (Briana Nicole Henry) confronts her husband, Curtis Ashford (Donnell Turner). Perceptive General Hospital viewers may have noticed he looked a little guilty or evasive when Jordan asked him how they got Ryan Chamberlain (Jon Lindstrom) to sign away his kidney so easily in Friday, June 7th’s episode, and how her eyes seemed to indicate her detective instincts were going into full gear! She may grill him on what he knows! Meanwhile, in Tanzania, Drew Cain (Billy Miller) tends to Dr. Kim Nero (Tamara Braun). Could she have become injured on their hike up Mount Kilimanjaro to scatter their late son Oscar Nero Quartermaine’s (Garren Lake Stitt) ashes?

Thursday, Harmony hopes Shiloh will come to her rescue in a situation, while Carly is stunned by another situation. Is Harmony trying to steal Wiley Cooper-Jones’ (Eric and Theodore) birth records from GH and is caught red-handed? Shiloh won’t be able to rescue her from his hospital bed if he’s still handcuffed to it! Or have the charges against him been mysteriously dropped and that is what Carly might be stunned by?

GH Spoilers: Nelle Benson Is Back

Friday, Nelle Benson (Chloe Lanier) is back, and she receives a surprise visitor; who could it be? Brad Cooper (Parry Shen), Liesl Obrecht (Kathleen Gati), Jasper Jacks (Ingo Rademacher), or perhaps even Shiloh? Curtis, meanwhile, remains optimistic. Will that be about his wife’s recovery from her kidney transplant, or his ability to keep her from learning the truth about how the kidney was really obtained?