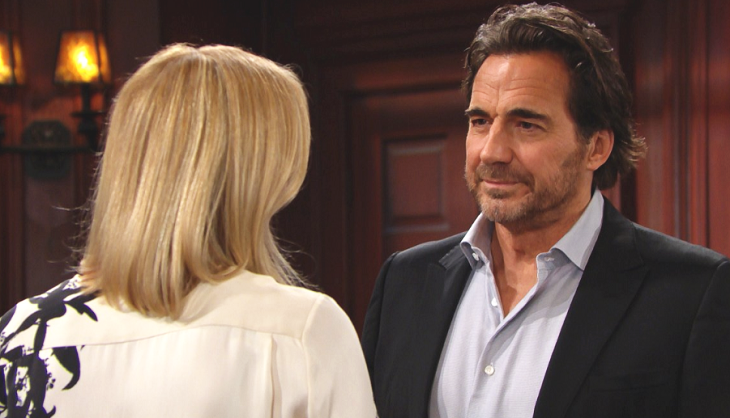 The Bold and the Beautiful spoilers indicate that the marriage between Brooke Logan (Katherine Kelly Lang) and Ridge Forrester (Thorsten Kaye) will come to an end when the baby switch is revealed.

Brooke and Ridge are one of B&B’s most popular couples. Despite all the obstacles the couple faced, they always found their way back to each other because of their destiny. But now, their relationship may come to an end for good once the truth about baby Beth comes out.

The rivalry between their daughters Hope Logan (Annika Noelle) and Steffy Forrester (Jacqueline MacInnes Wood) has often put Brooke and Ridge at odds. Brooke has supported Hope in her quest to be with Liam Spencer (Scott Clifton), while Ridge has encouraged Steffy to not give up on the man she loves.

Even though the couple often disagrees when it comes to their daughters, they try not to let it come between them.

Bold And The Beautiful Weekly Spoilers For June 10-14: Liam Moves In With Steffy—Wyatt Has Questions—Thomas Struggles With Flo’s Confession

However, the baby switch reveal will not only alter Liam’s relationships with Hope and Steffy, but it’s going to change Brooke and Ridge’s lives too.

When Brooke learns her granddaughter Beth is alive, she’s going to be overjoyed. However, she will soon experience anger when she learns Beth is the baby Steffy adopted. Brooke will believe that Steffy and her mother Taylor Hayes (Hunter Tylo) were responsible for the baby switch. She’ll assume this was their way of breaking up Hope and Liam.

Bold And The Beautiful Spoilers – Justice For Hope Spencer

While Brooke is going to want justice for Hope and Beth, Ridge is going to have to watch Steffy’s heartache as she gives up Phoebe. Ridge knows Steffy isn’t responsible for the baby switch, and she’s just as much a victim as Hope. Losing her daughter, a baby she’s grown close to, is going to be crushing for Steffy and Ridge will have to be there to comfort his daughter.

The aftermath of the baby switch reveal is going to put Brooke and Ridge at odds again. Their disagreement over Steffy’s role is going to cause a huge rift between them and this time destiny may not bring them back together.

Do you think Brooke and Ridge are headed for a splitsville again?