Days Of Our Lives Spoilers & Recap Monday, June 10: Will Proposes To Sonny – Ben Is Arrested For Arson 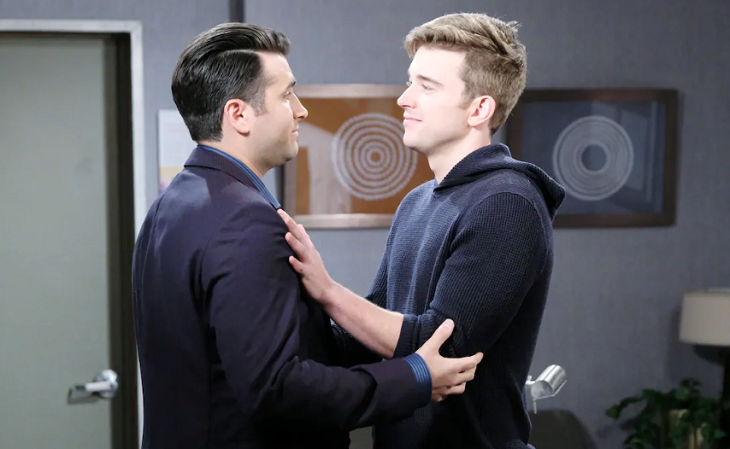 Days of Our Lives (DOOL) recap for Monday, June 10, 2019, reveals Sonny Kiriakis (Freddie Smith) threatens Eve Deveraux (Kassie DePaiva) if she doesn’t give him the diary.

Sonny offers to buy the diary from Eve. Eve swears to Sonny that she doesn’t have the journal. Sonny tells Eve if she doesn’t save Will Horton’s (Chandler Massey) death will be on her. Eve calls Xander Cook (Paul Telfer) and demands he return the book and the starts to go visit him. Eve asks Ben Weston (Robert Scott Wilson) if he wants his attorney, he declines.

Days Of Our Lives Spoilers – Lani Price Realizes The Truth

Days of Our Lives Rafe Hernandez (Galen Gering) breaks off the kiss with Lani Price (Sal Stowers) who tells him now they can be together with baby David. Lani is upset when Rafe tries to convince her that she’s getting too attached to David. Rafe tells Lani he should have never let her get so close to the baby. He says that David is not her son and never will be.

Lani tells Rafe that Jordan can’t take care of the baby and no judge will give him to Ben. Rafe tells Lani that she has a fantasy that she’s going to raise this baby and that’s not going to happen. She realizes that Eli Grant (Lamon Archey) and Rafe are right and say this isn’t right. Lani realizes that she let taking care of David take over her life and she apologizes. Rafe comforts her. Lani thanks Rafe for helping her realize the truth.

Days of Our Lives Rory (Kevin Riggin) tells Ciara Brady (Victoria Konefal) that Ben threatened to strangle him, Eli Grant overhears and demands to know why. Rory wants no trouble from the cops. Eli threatens Rory if he doesn’t tell him where Ben is. Rory tells Eli that Ben is headed for the Horton cabin. Ciara grabs Rory and demands to know why Ben went to the island but refuses to tell Ciara why.

Days Of Our Lives Spoilers – Eli Grant Saves The Day

Days of Our Lives Tripp Dalton (Lucas Adams) and Haley Chen (Thia Megia) are discussing how they were wrong to trust Rory. Tripp smells smoke but doesn’t realize it’s the cabin. Ben arrives outside but doesn’t know they are inside. Tripp and Haley realize the cabin in on fire, and there is no way out.

Eli arrives and arrests Ben when he tries to tell him people are trapped inside the building. Ben is taken to the station and Eve takes over questioning. Both Tripp and Haley have passed out by the time Eli gets to them. Eli saves Tripp and Haley and then places them under arrest.

Days of Our Lives Claire sets the cabin on fire and throw the passports in the fire before running away. Ciara and Claire meet in the square and she tells her about the run-in with Rory. Claire is excited that Ben is on Smith Island. Ciara starts to go to the island and Claire stops her.

Ciara says something doesn’t feel right. Claire tells Ciara something is wrong with Ben. Claire argues that Ben’s doctors could be wrong; even good people can snap. Claire says once you cross that line something is off. Ciara brings up the fire on Smith Island, and Claire immediately asks if they are dead.

Kate Roberts (Lauren Koslow) tries to blame Kayla Johnson (Mary Beth Evans) for not trying to help Will enough. Roman Brady (Josh Taylor) tells Kate they have one option and that’s it, Sonny tells them it’s a lost cause. Sonny tells them he asked Eve every way possible and she doesn’t have the diary. Will agrees that everyone has to face his impending death.

Kate tells Will he can’t lose hope, Will says he’s just being realistic. Will sometimes feels himself slipping away. Roman tells Will they are there for anything he needs. He tells Will that Marlena is calling his mom, Will ask Kate to call his dad. Sonny feels that he let Will down. Will wants to get remarried. Roman and Kate decide to lean on each other and call Kate agrees to call Lucas as Will asks Sonny to marry him again.