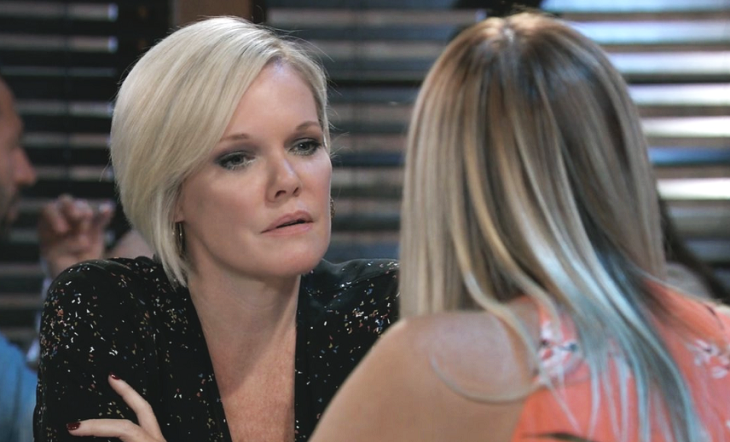 Jacks tells Bobbie he is staying in town. Bobbie and Jax talk about Jocelyn Jacks (Eden McCoy) and how she is doing. Jax tells Bobbie he will be working closely with Nina Reeves (Michelle Stafford).

General Hospital’s Nina asks Ava Jerome (Maura West) to be on the cover of Crimson. Ava doesn’t want to do the interview because she regrets meeting Ryan Chamberlain (Jon Lindstrom). Nina wants Ava to hear her out. Ava tells Nina that she should have listened to her. Ava doesn’t give a damn about anyone’s take on her life. Nina tries to talk Ava into doing the cover anyway. Ava tells Nina she has turned down plenty of offers for her interview. Nina wants to sell it as a triumph story. Nina tells Jax that Ava has agreed to be on the cover of Crimson.

General Hospital’s Carly Corinthos (Laura Wright) meets with Lucas Jones (Ryan Carnes) and asks why he didn’t turn to Sonny Corinthos (Maurice Benard). Julian Jerome (William DeVry) says he turned to him because he is Lucas’ father. Carly tells Lucas and Julian that Shiloh Archer (Coby Ryan McLaughlin) is under arrest, but Julian needs to stay out of it. Julian isn’t going to stay out of it; he’s going to do everything he can to help. Lucas tells Carly that Julian is taking none violent steps to help. Carly tells Lucas he needs to think like a parent.

General Hospital’s Jason Morgan (Steve Burton) shows up at the hospital to check on Shiloh’s arrest. A nurse stops to visit Shiloh; she is a DOD follower and believes he is innocent. Meanwhile, Harrison Chase (Josh Swickard) tells Jason what Shiloh’s charges are that tells him that Margaux Dawson (Elizabeth Hendrickson) is resigning. Chase thanks Jason for not killing Shiloh. Shiloh walks into Charlie’s and tells everyone he is free. Julian tells Shiloh to take a walk. Shiloh invites Julian to DOD as well as Lucas.

General Hospital’s Shiloh is joined by a nurse and pumps her for information on finding his baby’s birth certificate. The nurse is a DOD follower and offers to put together a list of hospitals for Shiloh. Chase starts to take Shiloh to his arraignment when Harmony Miller (Inga Cadranel) confesses to drugging Kristina Corinthos-Davis (Lexi Ainsworth) and Sam McCall (Kelly Monaco). Chase tells Sonny, and Jason about Harmony’s confession and arrest, and Shiloh released. Chase tells Sonny and Jason he wants to work together instead of them killing Shiloh. Jason asks Sonny what he wants to do. Sonny says anything that happens to Shiloh; it can’t be traced back to them.

General Hospital’s Willow Tate (Katelyn MacMullen) is joined at the school by Diane Miller (Carolyn Hennesy). Willow tells Diane that she is being watched. Diane wants to know how Willow’s mother found out that her child is alive. Willow tells Diane about the confrontation with her mother about the baby. Diane tells Willow there will never be any proof of the adoption.

Willow tells Diane that she has the last copy of the adoption papers, Diane asks if Willow is asking her to destroy her documents. Diane says legally Shiloh cannot do anything. Willow tells Diane that Shiloh has ways around it. Diane tells Willow that Shiloh is up against Alexis Davis, Sonny Corinthos, and the law. Diane says any evidence Shiloh gathers is inadmissible. Diane tells Willow that Shiloh has to prove a baby exists first.