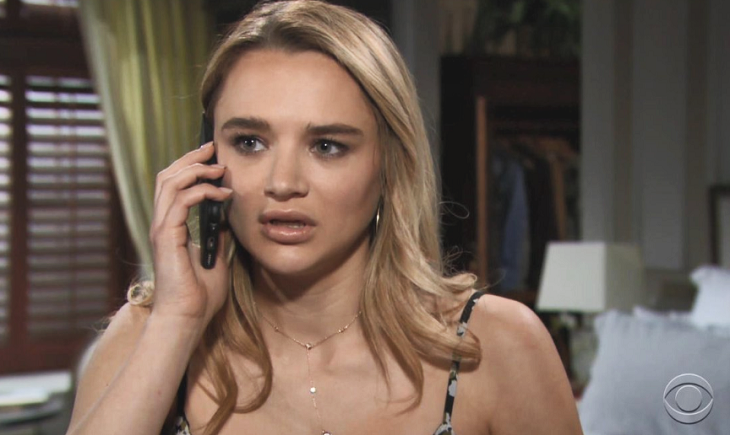 “The Young and the Restless” (YR) recap for Monday, June 10, 2019 reveals that at Nick Newman’s (Joshua Morrow) place, Summer Newman (Hunter King) opens up to her dad about Phyllis Summers (Gina Tognoni) barreling into Jack Abbott’s (Peter Bergman) house and centering her out in front of Theo (Tyler Johnson). Nick’s sorry.

Summer’s more worried than mad. Neither of them can reach Phyllis. Nick alludes to Phyllis causing him a serious problem and figures she left town to get her head straight. After, Nick updates his caregiver to be wary of Adam Newman (Mark Grossman) and he’s hired a bodyguard and driver.

At the tackhouse, Adam Newman gets a text that says, “I have something you want.” He asks who it is, but the person only replies, “You knew you’d be hearing from me.” Adam tells the person to name the place.

Young And The Restless Spoilers – Wants To Pay It Forward

In the penthouse, Y&R’s Devon Hamilton (Bryton James) and Elena Dawson (Brytni Sarpy) canoodle over breakfast. Elena wonders if Ana Hamilton (Loren Lott) went with Jett Carver (Gilbert Brown) to give them alone time. Devon’s sure she noticed the way he looks at her. Elena reveals she’s interviewing with the Chief of Staff at Memorial. Devon’s glad she won’t move out. They decide not to shower together, then can’t resist.

After, Elena gets an email congratulating her on paying off her student loan. Devon admits he did it – he’s been trying to pay things forward in life. Elena fumes that he meddled in her financial affairs without her consent. He clearly doesn’t know her at all. Later, Devon explains she’s not obligated to keep dating him because of what he did.

Paying it forward was Neil Winters (Kristoff St. John) message to him and he’s done it for many others. He sees she feels betrayed, but it was a gift. He doesn’t want her to leave. Elena can’t leave because she has no job, but feels violated and patronized. Devon’s very sorry. He embraces her.

Young And The Restless Spoilers – Elena Dawson Is Leaving

Elena believes his heart was in the right place, but she can’t handle the power differential in the relationship being so great. Devon thinks joining Jett and Ana on tour is extreme, but says he hopes to see her when she’s back.

Nate Hastings (Sean Dominic) arrives in Victor Newman’s (Eric Braeden) office, where the Mustache updates him that Nikki Newman (Melody Thomas Scott) is joining them. She knows about his disease, but Nate’s not to scare her.

Nate gathers he hasn’t been honest about the prognosis. Victor plans to beat the odds and won’t scare his wife unnecessarily. Nikki arrives and asks Nate if the treatment’s likely to succeed. Nate stalls that he’ll have a clearer view of things after test results and urges her not to research worst-case scenarios. Nate leaves and Nikki states the kids need to know what’s going on. Victor worries it would increase the animosity between Adam Newman and the others, but he’s glad to have Nikki on his side.

At Crimson Lights, Y&R’s Summer Newman tells Jack Abbott she can’t reach her mom. Jack assures Summer she did the right thing coming to him. Summer laments that it all keeps escalating. Jack feels if anyone’s to blame, it’s Adam Newman.

It would have been his idea to crash Billy Abbott (Jason Thompson) and Victoria Newman’s (Amelia Heinle) ceremony. Summer asks for Adam’s number, but Jack feels she should keep her distance. They discuss her disappointment about her marriage. Jack feels Phyllis Summers will regret not helping Summer through this difficult time.

Adam Newman arrives at a dive bar and sits. Kevin Fisher (Greg Rikaart) appears before him. Adam smirks and says he can’t imagine Kevin has anything he wants. Adam’s puzzled when he says it’s not a what, it’s a who. Kevin alludes to his new girlfriend and Adam learns he has Phyllis Summers. Adam informs him he’s screwed himself – Phyllis isn’t his girlfriend.

Young And The Restless Spoilers – A Matter Of Life Or Death

Kevin offers an even trade – Phyllis for Chloe Mitchell (Elizabeth Hendrickson). Adam thought she’d died. Kevin knows Adam tracked her down and he wants her back. Adam admits his P.I. found their house but they’d cleared out already. Kevin confirms they left when they found out he was alive, but Chloe’s disappeared. Adam points out he can’t publicly accuse him of kidnapping Chloe because he’d have to admit she was alive. He gets a text and leaves.

At Society, Y&R’s Nikki Newman talks up relaxation over work – Victor Newman should cut way back – it could be a matter of life and death.

At Dark Horse, Nick Newman informs Adam Newman he won’t give up Christian Newman under any circumstances and questions him about Phyllis Summers being unreachable. Adam claims it has nothing to do with him. Nick warns if he discovers it does, he’ll bring down a world of hurt on him.

At Newman, Y&R’s Victor Newman won’t take the afternoon off, but Nikki Newman urges him to give this fight his full attention. He’ll take it under consideration.

Young And The Restless Spoilers – Kevin Fisher Is An Idiot

Elena Dawson runs into Nate Hastings in the penthouse corridor. He offers to put in a good word for her with the Chief of Staff and they leave together.

At the Club, Y&R’s Devon Hamilton and Summer Newman enter Phyllis Summers’ room. Summer realizes all Phyllis’ toiletries and clothes are there, as well as her car keys. She phones Nick Newman and tells him something has definitely happened to her.

At home, Adam Newman phones someone and says there’s a change in plans…because Kevin Fisher is an idiot. And that’s a wrap. Don’t forget to check often with Hollywood Hiccups for all your latest spoilers, news, updates, and much more!