Days Of Our Lives Spoilers: Ben Arrested For Cabin Fire – Will Claire Get Away With Everything? 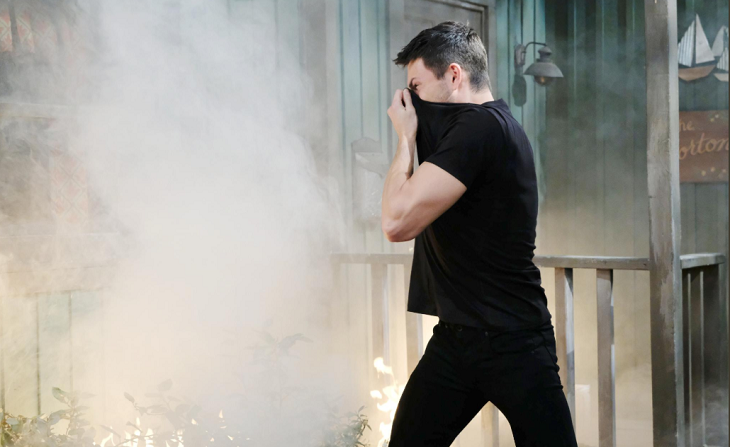 Days of Our Lives (DOOL) spoilers for the week of June 10 tease that Ben Weston (Robert Scott Wilson) follows Claire Brady (Olivia Rose Keegan) to Smith Island and discovers the Horton cabin is on fire. Immediately, he suspects that Claire had something to do with it. Outside the cabin, he finds a lighter.

Just as Ben picks up the lighter, Eli Grant (Lamon Archey) shows up and jumps to the conclusion that he started the cabin fire. According to Soap Opera Digest, Eli puts Ben under arrests.

Of course, the DOOL fans know that Ben is innocent and it’s Claire that started the fire. But it doesn’t look good and Eli is going on what he sees at the time.

“Ben is trying to push the smoke out the way and get to the door,” Wilson explains. “He looks down and sees the lighter. He picks it up as Eli comes around the corner. It really looked like Ben was caught red-handed. Ben thinks he is royally screwed –it really doesn’t look good at all.”

Days Of Our Lives Spoilers: An Unexpected Death Rocks The Brady Family

Days spoilers tease that Ben tries to explain the situation but Eli refuses to listen. He hands him over to another officer who takes Ben off to the police station. If Eli wouldn’t have been there, he would have saved the day.

Once Ben gets to the police station, Eve Donovan (Kassie DePaiva) is waiting for him. Eve believes this is revenge for her daughter. Ben tries to defend himself, stating Claire is the one that started the fire.

What Ben doesn’t know is that Even knows about Claire fire-starting background and she has been protecting her for all these months. Even doesn’t care about that, her only concern is that Ben pays for killing her daughter!

Ciara Brady (Victoria Konefal) shows up with Claire and she wants to know why he was at the cabin. It really doesn’t look good for Ben. DOOL spoilers tease that she wants to hear from Ben on why he was there.

Worried about it all, Claire talks with Eve to make sure the charges against Ben will stick. Ciara will tell Ben they will find out how to clear his name because she knows he didn’t do this. This is huge for him. Someone to be in his corner and believe him even when it looks really bad.

Days Of Our Lives Spoilers: Will Proposes To Sonny https://t.co/4tCH5Rdy8D pic.twitter.com/NwFchBkmNz

In the end, Ciara and Ben will figure out a way to prove Ben didn’t start that first cabin fire and clear his name. As an added bonus, Eve and Claire will go down when the truth finally comes out.