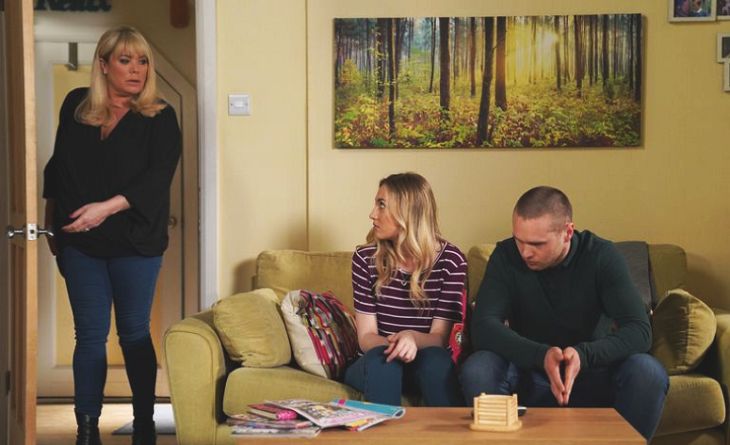 On “EastEnders,” Keanu Taylor (Danny Walters) may finally confess his affair with Sharon Mitchell (Letitia Dean) after he finds out that she is pregnant, which is set to happen next week. Sharon tries to hide her pregnancy, but her family is bound to discover it eventually.

Viewers may recall that Sharon and Keanu rekindled their affair at a time when Keanu was having problems with Louise Mitchell’s (Tilly Keeper) pregnancy.

Louise recently found out that her father, Phil Mitchell (Steve McFadden) paid Keanu to be with her. Feeling furious and betrayed, Louise planned to have an abortion but backed out in the end.

EastEnders Spoilers – Kept It A Secret From Keanu Taylor

However, she decided not to tell Keanu that she decided to keep the baby. Instead, she told him that she had the procedure because he was the father. At the Queen Vic, Sharon found Keanu and they started to argue. They ended up in the Arches where they shared a kiss, which then led to something more.

EastEnders: Adam Plays With Habiba’s Feelings By Changing His Mind After Ending Their Affair

In the previous episode, Keanu has decided to stay in Walford after Louise revealed that she was still pregnant. But Sharon will also have some shocking news for everyone as the episode ended with her staring at a positive pregnancy test. She will try to find ways to cover it up but her secret will eventually be discovered by her family next week.

When Phil finds out that his wife is expecting, he will spread the news to the rest of the Mitchells. What he doesn’t know is that he might not be the father of the baby due to Sharon’s on and off relationship with Keanu. The man who knocked up her daughter may also be the father of his wife’s baby.

EastEnders Spoilers – The News Starts To Spread Like Wildfire

Phil asks his family to keep Sharon’s pregnancy on the down-low but the news starts to spread like wildfire. Sharon doesn’t want Keanu to find out about it, so she decides to deny everything.

However, Keanu will soon find out about Sharon’s pregnancy and Louise will be the one who will break the news to him. He confronts Sharon, but she says the baby is Phil’s.

Sharon tries to stop Keanu who, is about to confess to Louise about his affair, but she’s stopped in her tracks by Karen Taylor (Lorraine Stanley), who is mortified to discover Sharon is pregnant.