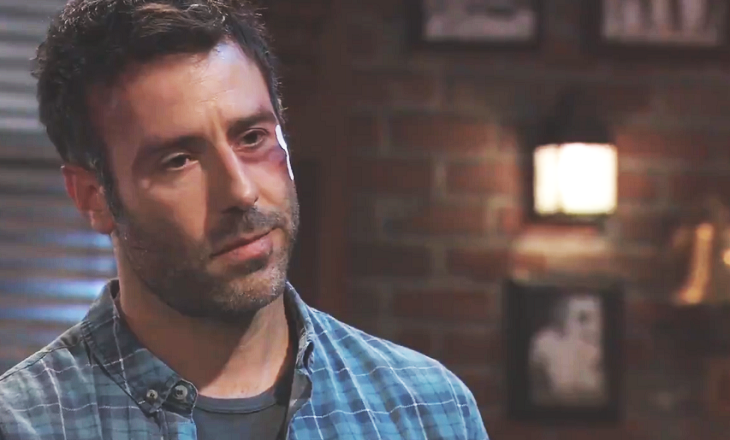 General Hospital (GH) recap for Tuesday, June 11, 2019, reveals Sonny Corinthos tells Jason Morgan not to do anything stupid. Jason couldn’t kill Franco Baldwin for what he did to Sam McCall but he can Shiloh Archer. Sonny doesn’t care if Jason takes out Shiloh, but he has to do it right. Jason plans to meet Sam at Charlie’s.

General Hospital’s Shiloh talks a waitress into serving him at Charlie’s while he searches for hospital’s where Willow’s child was born. Jason calls Sam who is at Charlie’s, Shiloh approaches her and says he’s sorry. Shiloh tells Sam that Harmony Miller is the one who drugged her and wants to continue what they started. Sam tells Shiloh that he was going to rape her, Shiloh denies it.

He says Sam promised to help him heal. Sam says she lied just like Shiloh did. Sam tells Shiloh that she knows he came to Port Charles looking for her. Shiloh grabs Sam’s arm, Jason tells Shiloh his next move could be his last. Shiloh asks if Sam keeps promises she makes to Jason as well. Shiloh says to them he’s looking for his child. He has told the cops if anything happens to him Sonny or Jason is behind it.

Shiloh leaves, Sam is glad she doesn’t have to pretend to believe in him anymore. Sam tells Jason that she doesn’t want this to be like Franco. Jason tells Sam that most memories fade but not Franco. He is afraid he can’t protect Sam. Sam didn’t ask Jason to change and he can’t ask her to either. Sam and Jason talk about having nightmares and promise to wake each other up if they do. She loves Jason and feels safe with him, Jason loves her too. Sonny calls Jason and tells him he can’t take Shiloh out. Sam tells Jason they will find a way to do it together.

General Hospital’s Harrison Chase comes to see Willow Tait at the school, and she informs him how many people are looking after Wiley Cooper-Jones. Chase tells Willow that the charges have been dropped. Willow tells Chase that Harmony is her mother and she will always choose Shiloh over her.

Willow tells Chase about her dad. Willow tells Chase that her dad died and that Harmony got jealous of her when Shiloh started favoring her. Willow says Shiloh must be furious that Harmony didn’t bring him information on his child so she confessed to make it up to him. Willow shows Chase the baby’s hospital bracelet and he offers to keep it safe for her.

General Hospital’s Shiloh goes to the hospital and claims to be Willow’s brother. The lady in the records department tells Shiloh that Willow was admitted to obstetrics and had a healthy baby boy. Shiloh can’t wait to welcome the little guy into the family.

General Hospital’s Maxie West and Peter August are at Crimson, Maxie is setting up for a photo shoot. Peter asks about their trip to visit Robin Scorpio-Drake and the kids. Maxie has a surprise party planned for Peter and says her calendar is full. Peter wants Maxie to go out for dinner.

Maxie goes back to work as a distraction. Maxie asks Peter if he has talked to his mom about Dante Falconeri’s (Dominic Zamprogna) location, he hasn’t. Maxie is worried about Lulu Falconeri (Emme Rylan) without Dante. She says you don’t give up on love, Lulu and Dante don’t need room, they need to get a room. Peter tells Maxie that she is the first person to show him what love is, Maxie thinks Peter is getting the hang of it.

General Hospital’s Alexis Davis tells Neil Byrne about the issues with Wiley and Julian Jerome’s request for her to help his son in whatever way possible. Alexis says that Julian expects her to be morally flexible. Neil says when people break the rules, they are getting something out of it.

Alexis says Julian pointed out that Kristina didn’t ask for help and is probably right about her ethics. Alexis tells Neil it isn’t easy not knowing about the pledge. She ask what Neil would do if his daughter knew something that could ruin his life. Neil ends the session for today. Alexis comes back and apologizes for making Neil uncomfortable.