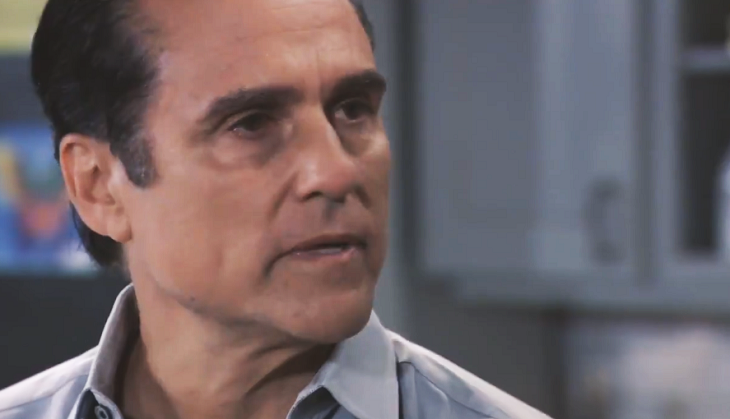 General Hospital spoilers tease that Sonny Corinthos (Maurice Benard) will take matters into his own hands. Of course, Sonny’s always got his fingers in a lot of pots, so this could be referring to more than one situation.

He’s not going to be happy when he finds out Jasper Jacks (Ingo Rademacher) is going to be at the Metro Court a lot, having taken over half of Crimson Magazine and apparently making it a point to be more hands-on.

And Sonny won’t be happy if Jax goes through with the purchase of Kate Howard’s (Kelly Sullivan) old house next door to the Corinthos compound either, although for the time being Carly Corinthos (Laura Wright) had talked him out of buying it himself.

As longtime General Hospital viewers know, the romantic rivalry between Jasper Jacks and Sonny Corinthos goes back over twenty years, starting with Brenda Barrett (Vanessa Marcil). Jax and Sonny have been involved with the same women and clashed over it several times in their history with one another.

Plus Jax had married Sonny’s little sister Courtney Matthews (Alicia Leigh Willis) for a short time, which got really ugly when she got pregnant with Spencer Cassadine (Nicolas Bechtel).

She also apparently rigged several paternity tests to say Jax was the father when in reality Nikolas Cassadine (Tyler Christopher) was. That caused even more conflict between Sonny and Jax. So Sonny might just go ahead and buy that house anyway to keep Jax out of it.

There are other situations that Sonny might decide to take matters into his own hands. Number one could be how to eliminate the problem of Shiloh Archer (Coby Ryan McLaughlin) and his being a danger to little Wiley Cooper-Jones (Eric and Theodore).

Wiley is Carly’s nephew by adoption and Michael Corinthos’ (Chad Duell) godson. Of course, no one knows except Brad Cooper (Parry Shen ) and Nelle Benson (Chloe Lanier), who shows up later in the week, that Wiley is really Jonah Corinthos, Michael and Nelle’s presumed dead son.

There is one more slight possibility for Sonny to take matters into his own hands about. He could hear about Ryan Chamberlain’s (Jon Lindstrom) transfer from General Hospital into Pentonville through the grapevine and have one of his contacts on the inside end any future potential Ryan problems permanently!