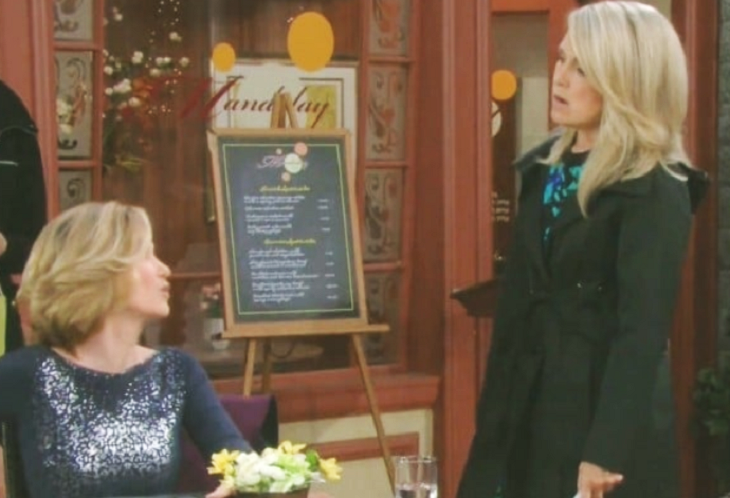 Days of Our Lives spoilers tease that Jennifer Horton (Melissa Reeves) and Eve Deveraux (Kassie DePaiva) will have a heated confrontation. More than likely this time it’s about Jennifer’s favorite subject for clashing with Eve about, Jack Deveraux (Matthew Ashford).

It will also more than likely involve their son JJ Deveraux (Casey Moss) who’s in jail because Jack swapped him for Jennifer herself who tried to knock some sense into him, but helped Tripp Dalton (Lucas Adams) escape at the same time.

It sounds like they’re really going to go at it and Eve will know by the time Jennifer’s done how Jennifer feels about Eve’s style of “justice” in no uncertain terms, and more than likely, Eve herself! If it weren’t for Jack and Eve using Haley Chen (Thia Megia) as a poster child for illegal immigration and making it a key focus of their campaign, JJ wouldn’t have felt so desperate to help her and wouldn’t be in jail.

Days Of Our Lives Spoilers – JJ Deveraux Not In The Cabin

Will Jenn know about the fire at the Horton cabin by this time and that Tripp Dalton (Lucas Adams) and Haley barely escaped with their lives and it could have been JJ in that cabin?

Days Of Our Lives Spoilers: Ben Arrested For Cabin Fire – Will Claire Get Away With Everything?

At least something good came out of JJ’s being in jail, he wasn’t in the cabin when it was set on fire. Eve and maybe Jack, if he hears the argument might point that out; but still the ultimate blame will be on Eve, as far as Jenn will be concerned!

Jennifer just might start a little campaign of her own; an investigative one to dig up and expose as much dirt and dirty political maneuvering as she can against Eve and maybe even against Jack. A factual expose’ on Eve and how incompetent she is as a police commissioner might be gripping reading for the Salem Spectator readers.

Days Of Our Lives Spoilers – Ouster Of The Current Regime

If she digs hard enough, and exposes enough wrongdoing, she might even give the voters of Salem reason to not be so pleased with their choices on Election Day. The citizens of Salem themselves might be inspired to call for an ouster of the current regime and want the old one back.

Days Of Our Lives Spoilers: Stefan Has A Surprising Offer For Abe– Will He Take It? https://t.co/mPDpRFu5R8 pic.twitter.com/ldZUrWwUkB