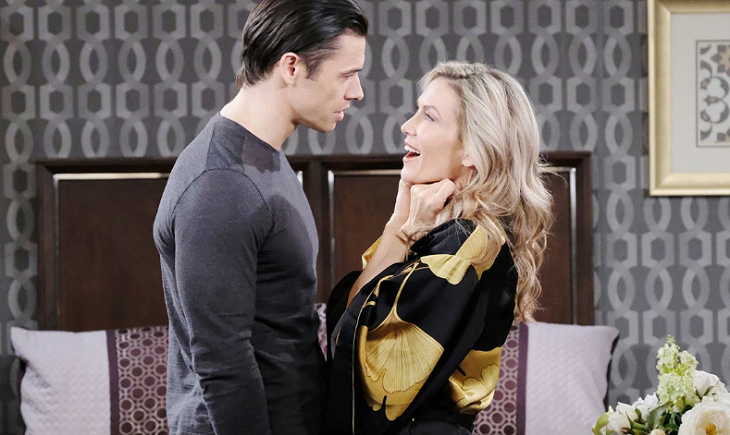 Eve says she doesn’t have the journal. Jennifer tries to convince Eve to do something to save Will. Eve orders Jennifer to get out of her office, Jennifer refuses. Eve threatens to have Jennifer removed from her office. Jack comes to Eve’s office and asks what is going on between them. Jennifer tells Jack they have reason to believe the Eve stole the diary to keep him from regaining his memory. Jack tells Jennifer that Eve having the diary is ridiculous. Jennifer makes her case that Eve is the only one with anything to gain.

Jennifer tells Jack that Will needs the journal to save his life, and Eve won’t hand it over. Jennifer urges Jack to talk Eve into doing the right thing for a change. Jack asks Eve to tell him the truth. Jack asks Eve if she has been keeping the journal from him – she lies her way out of it. Eve lies to Jack, swearing she doesn’t know where the diary is. Eve doesn’t have the diary but hopes it shows up. Jack tells Eve that a lie between them could shatter everything they have built.

Days of Our Lives Jack Deveraux (Matthew Ashford) approaches Abe Carver (James Reynolds) at the Brady Pub. Jack accuses Abe of being mad because he won the election. Abe says Eve had accomplished more in two days than Hope did when she was in office. Abe calls Jack out on arresting Jennifer and J.J. Deveraux (Chandler Massey).

Days of Our Lives Stefan Dimera (Brandon Barash) wants to speak to Chloe Lane (Nadia Bjorlin), who wants nothing to do with him. Chloe tells Stefan how disgusting he is. Victor Kiriakis (John Aniston) witnesses it. Stefan tells Victor that he doesn’t need his advice. He calls Abe over to join him and Victor. Stefan offers Abe a job at Dimera. He wants Abe as CCO at Dimera. Stefan calls the board with his idea of hiring Abe as CCO. “Nicole” shows up, wanting to talk to Stefan.

Days of Our Lives Chloe goes to Doug’s Place and organizes the silverware to calm herself down after the run-in with Stefan. Rex Brady (Kyle Lowder) tries to talk to Chloe and calm her down. Chloe tells Rex how Stefan wanted to take it slow and ended up sleeping with Gabi the whole time. Rex confesses to being the same kind of man.

Days Of Our Lives Spoilers – Sarah Horton Needs A Miracle

Days of Our Lives Sarah Horton (Linsey Godfrey) tells Rex that she couldn’t tell Maggie Kiriakis (Suzanne Rogers) that Will Horton (Chandler Massey) is dying. Rex tells Sarah this can’t wait and offers to go with her. Rex calls Sarah to see if Maggie knows about Will yet. Sarah is waiting for a miracle, Xander walks in and claims to be the miracle Sarah is looking for at the moment.

Days of Our Lives Brady Black (Eric Martsolf) finds Maggie on the couch with an ice pack. Maggie doesn’t know how to face the people at the AA meeting after falling off the wagon. Maggie tells Brady she saw Kristen Dimera (Stacy Haiduk) in Nicole Walker’s (Arianne Zucker) room.

Brady talked to Nicole and Kristen wasn’t there. Brady talks about finding Maggie and Xander Cook (Paul Telfer) together. Maggie defends Xander to Brady. Brady urges Maggie to keep her guard up when it comes to Xander. Sarah arrives and needs to talk to Maggie.

Days Of Our Lives Spoilers – Maggie Kiriakis Is Grateful

Brady stops Sarah from being honest with Maggie; he wants her to wait until after the meeting. Sarah agrees to wait until Maggie gets home. Maggie thanks Brady for taking her to a meeting. Brady wants to get Maggie back home to Sarah. Victor sees Maggie and Brady out and tells Brady that Maggie should be home. Maggie tells Victor she is the one who fell off the wagon.

Days of Our Lives Kristen is in her room when Xander joins her. Xander tells Kristen about his conversation with Maggie. Xander defends Maggie to Kristen. Kristen is determined to get Brady back. Kristen has to play it cool, so will concentrate on taking control of Dimera. Xander and Kristen talk about taking over the respective companies and making their families pay.

Days Of Our Lives Spoilers: Stefan Has A Surprising Offer For Abe– Will He Take It? https://t.co/mPDpRFu5R8 pic.twitter.com/ldZUrWwUkB

Kristen wanted to revive E.J. Dimera (James Scott) and restore Dimera to its former glory. Xander tells Kristen that E.J. wasn’t the only one he was trying to revive. He says he knows she had Andre Dimera (Thaao Penghlis) and Stefano Dimera (Joe Mascolo) as well. Xander says A.D. could also be Anthony Dimera (Thaao Penghlis) as well. Xander asks Kristen if any of them survived the fire. Xander gets a message from Eve and leaves.