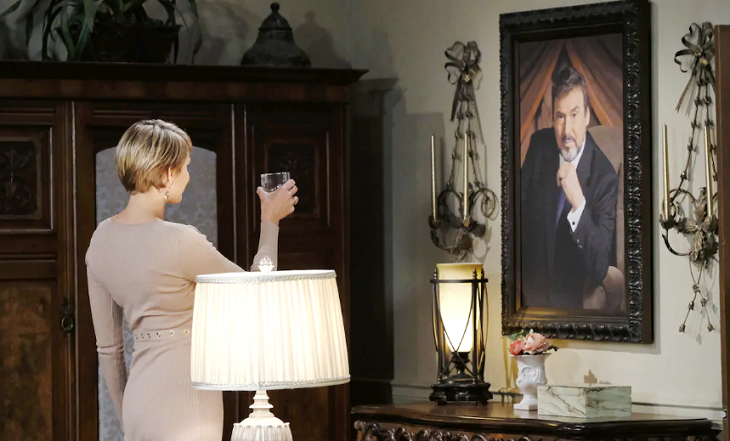 “Days of Our Lives” spoilers for Thursday, June 13, tease that “Nicole Walker” (Arianne Zucker) will push Stefan DiMera (Brandon Barash) to give her a job.

She’ll hope she can worm her way into DiMera Enterprises and set herself up to take it over one day. DOOL fans know “Nicole” is actually Kristen DiMera (Stacy Haiduk), so she’ll be duping her brother with this sneaky part of the plan.

“Nicole” will ultimately convince Stefan that she should run Basic Black. He’ll give her some power, but Kristen will inevitably end up seeking far more.

Days Of Our Lives Spoilers – Sarah Horton Caught Off Guard

Meanwhile, Xander Cook (Paul Telfer) will catch Dr. Sarah Horton (Linsey Godfrey) off guard. “Days of Our Lives” spoilers say Xander will play the hero and offer the diary that could save Will Horton’s (Chandler Massey) life.

Of course, Xander will have to be careful about how much he reveals and how he spins it. He wants to look good in Sarah’s eyes, so he can’t act like he’s been holding out on Will. Xander may insist this is a new discovery and hope Sarah buys whatever story he cobbles together. He’ll turn on the charm and act like he’s saving the day, but he’ll still face plenty of questions.

Other “Days of Our Lives” spoilers state that Ted Laurent (Gilles Marini) will form a plan. Hope Brady (Kristian Alfonso) will reject a present on Thursday, so Ted will realize his romance is stalling. He’ll want to move things along, but he’ll think he needs something big to truly win Hope over.

Ted will plan to make an admission to “Nicole,” so what’s this about? Will he decide to confess that Holly Jonas (Harlow and Scarlett Mallory) is still out there? Whatever the case, “Days” spoilers say Ted’s about to make the wrong choice since “Nicole” is really Kristen – and she’s the secret partner he doesn’t know about.

While Ted gears up for an admission he’ll make on Friday, Dr. Marlena Evans (Deidre Hall) will bond with Kate Roberts (Lauren Koslow). Their grandson is dying of a brain tumor and there’s nothing they can do about it, so they’ll certainly unite in their sorrow.

Days Of Our Lives Spoilers: Ben Is At The Right Place At The Wrong Time — Eli Forced To Arrest Him! https://t.co/AcXkaXzR2s pic.twitter.com/EGI2IKl2fy

Will’s condition will leave Kate and Marlena distraught in Thursday’s episode, but things will turn around for him due to the diary next week. It sounds like the excitement’s revving up in Salem. We’ll give you updates as other “Days” news and rumors emerge.