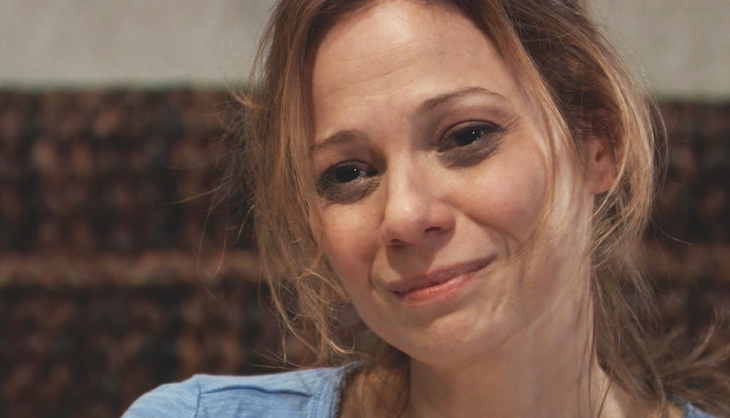 Jocelyn texts Oscar Nero Quartermaine’s (Garren Stitt) phone and says she misses him, it shows delivered and read. Jocelyn freaks out over the text message. Drew Cain (Billy Miller) messages Jocelyn back and says they scattered Oscar’s ashes. Drew offers to help her, and she can help them.

Jocelyn tells Maxie West (Kirsten Storms) that she never got to say goodbye to Oscar; she was asleep when he died. She wonders what could have happened if she had stayed awake and talked to Oscar. Maxie tells Jocelyn to bring Oscar back. Jocelyn talks about Sonny Corinthos (Maurice Benard) telling her how he feels loved ones close by sometimes. Maxie suggests Jocelyn have a séance to connect with Oscar.

General Hospital’s Kim Nero (Tamara Braun) and Drew have returned from scattering Oscar’s ashes. Kim isn’t feeling well after the climb. Drew wants to drink to Oscar. Kim collapses in Drew’s arms. Kim wakes up and Drew tells her the doctor says she needs to get some rest. Drew tells Kim to go back to sleep; she will feel better when she wakes up. She disagrees because she will have to face the fact that Oscar is gone all over again. Kim is comforting Drew but sees Oscar instead.

Kim thinks she is talking to Oscar and talks about Drew in his uniform. She thinks she should have written to Drew about Oscar. Kim tells Oscar he deserved more of a family than she gave him. She wants Oscar to forgive her; there is nothing to forgive. Kim wakes up to find Drew on her couch.

Drew asks what the last thing Kim remembers is, she says they were going to watch the sunset. Drew goes to get breakfast for Kim. Kim touches her stomach and remembers talking about a little brother or sister for Oscar.

General Hospital’s Ava Jerome (Maura West) is with Maxie and Nina Reeves (Michelle Stafford) discussing the cover story. Ava hasn’t signed the contract and plans to read it thoroughly first. Jax shows up for the meeting, Nina had no idea he was attending. Jax asks if legal sent the contract. Jax sends Maxie out to show Jocelyn around.

Ava starts nitpicking at the deal. Nina tells Ava that readers want to know the real Ava. Jax can’t believe that Ava wants to maintain her integrity when Connie Falconeri (Kelly Sullivan) has neither. Jax tells Ava maybe the readers need to be reminded that Ava killed Connie in that very room. Nina promises to fix things with the magazine; Ava bails thanks to Jax. Nina tells Jax to go to Ava and fix this no matter what it takes.

General Hospital’s Kevin Collins (Jon Lindstrom) shows up to check on Jordan Ashford (Briana Nicole Henry). Franco Baldwin (Roger Howarth) and Kevin head to Jordan’s room as Liz Baldwin (Rebecca Herbst) is getting her out of bed. Curtis Ashford (Donnell Turner) thinks it’s too soon for Jordan to be out of bed. Stella Henry (Vernee Watson) arrives and ushers Curtis out of the room for a few minutes. Jordan doesn’t understand why Ryan Chamberlain (Jon Lindstrom) would choose to save her life.

Jordan thinks someone poisoned Ryan to cause the seizure. Jordan feels there was a conspiracy to get Ryan’s kidney. Jordan believes half the hospital staff was in on this seizure and kidney donation. Jordan knows the ring leader wouldn’t leave any evidence behind if she right about who he is. Meanwhile, Franco wants to celebrate.

General Hospital’s Ryan wakes up in the Pentonville Infirmary with Valerie Spencer (Paulina Begembe) and Hamilton Finn (Michael Easton). Ryan demands to know how he got there and why he is in so much pain. Finn tells Ryan it is where he donated his kidney. Valerie goes to the hospital and lets everyone know that Ryan is awake and saying crazy stuff.

Kevin tells Jordan that Ryan is trying to claim diminished capacity. Ryan argues with Finn that he didn’t agree to this surgery. Finn tells Ryan that Stella got Ryan to agree to donate the kidney. Ryan accuses Finn and Kevin stole the kidney. Ryan tells Finn that he is coming after everyone involved in taking his kidney. Finn leaves, and Ryan gets a visitor.