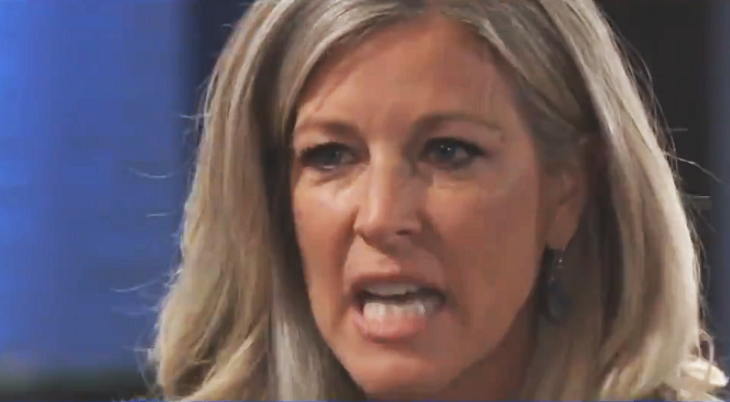 “General Hospital” spoilers for Thursday, June 13, tease that Ava Jerome (Maura West) will refuse to change who she is or reframe her story. It looks like she’ll tell Jasper “Jax” Jacks (Ingo Rademacher) to take her as she is or not at all. Nina Reeves (Michelle Stafford) told Jax to fix the deal he botched, so it seems he’ll do his best to make it happen.

Of course, Carly Corinthos (Laura Wright) isn’t going to like this. The idea of Ava being splashed across the cover of Crimson as some inspirational icon won’t be appealing. Carly will rage over Ava being a free woman when her son is dead. Morgan Corinthos’ (Bryan Craig) demise is always going to be a huge issue, but Jax may hope he can calm Carly down and make her view this as just business.

Other “General Hospital” spoilers say Sonny Corinthos (Maurice Benard) will observe something shocking. He’ll see Lulu Falconeri (Emme Rylan) out and about with a new man, so he may fear she’s given up on Dante Falconeri (Dominic Zamprogna). However, Lulu will undoubtedly just be working on that story she mentioned to Maxie Jones (Kirsten Storms).

It sounds like Lulu will have to clear up some confusion soon enough. Over with Willow Tait (Katelyn MacMullen), she’ll remain worried about the threat Shiloh Archer (Coby Ryan McLaughlin) poses to “Wiley Cooper-Jones.” GH fans know Willow has a good reason to fret since Shiloh’s hot on the trail.

Michael Corinthos (Chad Duell) will do his best to soothe Willow’s nerves. He’ll note that Shiloh’s first move would be to prove Willow had a baby. Michael may feel like that’s as far as Shiloh would get, but Willow probably won’t be so sure.

“General Hospital” spoilers say Shiloh will pay a visit to locked-up Harmony and contend that finding his son is what’s most important. He’ll be less concerned about Harmony’s freedom and more concerned about his kid’s identity. Shiloh may hope Harmony can remember something from her earlier chat with Willow. He’ll be looking for any clue that could bring him a step closer to the truth.

Back with Sonny, he’ll assure Brad Cooper (Parry Shen) that he’s not going to let anything happen to that little boy. Sonny’s certainly the kind of guy who’ll resort to deadly tactics if need be. Julian Jerome (William deVry) will want in if this becomes a lethal plot. He’ll be willing to do whatever it takes to keep Shiloh away from “Wiley.”

In Pentonville, Nelle Benson (Chloe Lanier) will form a surprising new friendship. Then again, maybe it’s not so surprising since Nelle and Ryan Chamberlain (Jon Lindstrom) are kindred spirits. Nelle doesn’t have quite the body count that Ryan does, but she’s definitely killed before. Ryan and Nelle are also victims of kidney theft, so they’ll have a lot to bond over.