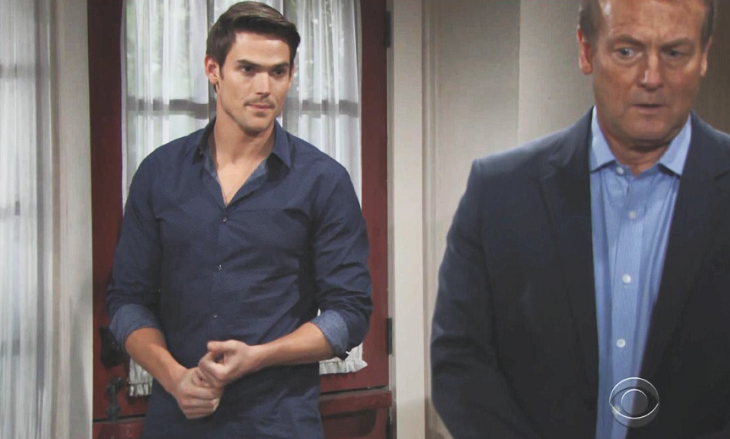 The Young and the Restless spoilers tease that Paul Williams’ (Doug Davidson) visit to the tack house was just the beginning of the Chief’s latest trail that leads to Adam Newman (Mark Grossman). The undead man’s link to Phyllis Summers (Gina Tognoni) is too shady to be nothing, as Adam claims.

Paul referenced ancient Y&R history when saying that he and Christine Williams (Lauralee Bell) know too well about Phyllis’ dark side. Hardcore fans recall that the returning Michelle Stafford’s (Phyllis) version of this character once ran down Pristine and left them for dead. She never faced legal prosecution for those actions because enough evidence didn’t exist.

Having Phyllis pair with Adam as Tognoni’s write-out was intriguing. That could be revisited at a later point when Stafford arrives, possibly including what would be an epic Phadam coupling. If not that, then at least these two villains have established a working relationship that can be revisited when both characters need to exploit each other again.

Young And The Restless Spoilers – Information Was Withheld

Adam didn’t need to tell an outright falsehood when speaking about Phyllis. But that wasn’t the only element of deception Paul had his antennae raised for.

Instead, Adam withheld information that Kevin Fisher (Greg Rikaart) just forced on him at a bar. Kevin’s return to Genoa City, Wisconsin, was caused by Chloe Mitchell’s (Elizabeth Hendrickson) abduction by Adam. He appears to be withholding that information from Kevin, which is the same technique that Adam used with Paul.

Adam’s tell to Kevin, regarding Chloe having shot him, confirmed what fans thought. It had to be her, based upon recent news that Hendrickson was leaving her role as Margaux Dawson on General Hospital and the actor’s recent social media wink that Khloe has further stories to tell.

Young And The Restless Spoilers – On His Own Time And Terms

Paul believed that Adam (as then played by Justin Hartley) was dead, based upon DNA evidence that was gathered by his Crime Scene Investigation team around the cabin in September 2016. That GC outskirts setting was the first place that Chloe tried to kill Adam, with the tack house becoming the second.

Adam has been in touch with an unknown enforcer, who’s seemingly kidnapped Chloe, as Kevin asserted. Grossman’s revived, but not redeemed character isn’t about to allow Paul to handle justice. Adam intends to address his two-time attempted murderer on his own time and terms.

Young And The Restless Last Week In Review: Adam And Phyllis Team Up – Kyle Wants A Life Of Servitude To Lola

Yes, Paul knows something’s off with Adam, as is always true. But the chief’s belief that Adam is involved in Phyllis’ disappearance represents a blocked view of the real story that’s continuing to develop. In reality, Paul’s former employee, Kevin, is the criminal in this instance.