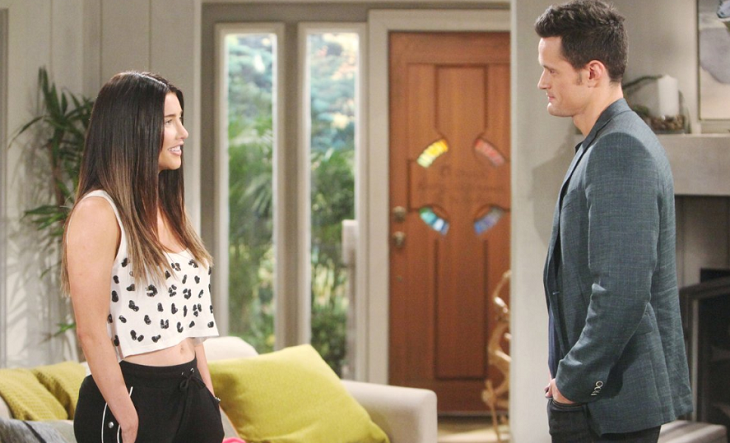 The Bold and the Beautiful spoilers tease that Thomas Forrester (Matthew Atkinson) went to his sister intending to tell her about Phoebe Forrester (Madeline Valdez and River Davidson) being Beth Spencer. But Steffy Forrester (Jacqueline MacInnes Wood) and Liam Spencer’s (Scott Clifton) interruption gave Thomas an out for now.

Just as Flo Fulton Logan (Katrina Bowden) was suggesting earlier at the Forrester mansion, telling Steffy or Hope Logan (Annika Noelle) about Beth-Phoebe will likely help Lope reunite. Whatever Steffy and Liam are rekindling will also be in jeopardy, if not end. Plus, of equal importance, Steffy would be forced to deal with losing the little girl she believes she adopted and has come to love as her own.

However, Thomas left Flo and drove his surely sweet luxury car directly to Steffy’s. He entered without even saying hello, initially thinking that only, Steffy, Kelly Spencer (Zoe Pennington and Chloe Teperman), and Beth-Phoebe were there.

Bold And The Beautiful Spoilers – No Reveal Dropped

B&B intentionally wrote Clifton out of the scene just prior to Atkinson’s arrival at the front door of the cliff house. With Liam leaving the living room to visit the girls, Thomas had a moment to tell Steffy everything, or at least try to do so.

Steffy’s gush about Liam agreeing to move back in gives Thomas more than pause. He stops himself from delivering the truth and exits without pushing this storyline to a climax.

Telling Steffy would have created the possibility that she immediately relays the incredible news to Liam, or joins Flo, Zoe Buckingham (Kiara Barnes), and the others as a secret keeper. Savvy soap fans likely guessed that Liam’s presence at the cliff house and his agreement to move back in, which immediately preceded Thomas’ arrival, likely meant that no reveal would be dropped.

Bold And The Beautiful Spoilers – Waiting For The Collapse

As Soap Opera Spy previously reported, Flo, Zoe, and Xander Avant (Adain Bradley) are naturally wondering when the roof will fall in. Thomas left Flo, having said that his sister and Hope needed to know the truth.

Flo, feeling a mix of relief and distress, believed the Thomas would deliver the message without delay. She told him the truth in saying that she’s been trying to tell Hope what happened on Catalina Island. But one wonders if Bowden’s character will ever bring herself to do that?

The mention of that setting to Steffy, the intensity with which Thomas addressed her after entering the potentially revived Steam house, and the proximity in which he stood near his sister teased the hoped-for reveal. But the daily grind of soap tales includes stretching the plot. And so Beth remains Phoebe for now.