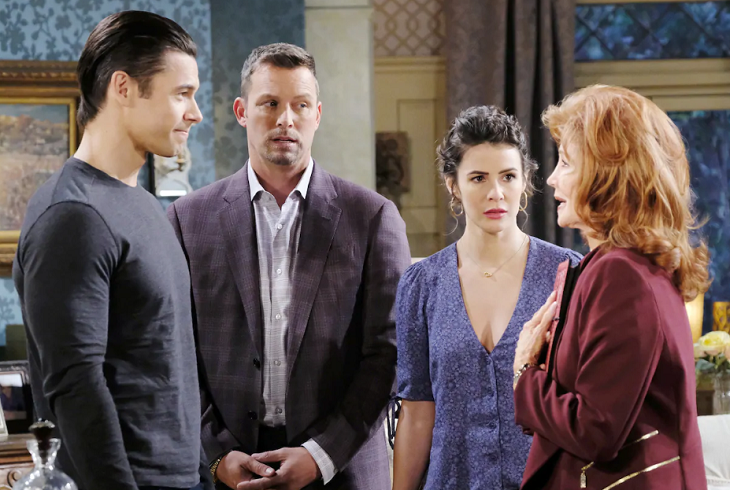 Ted Laurant (Gilles Marini) asks Hope what she has heard. Hope tells Ted that Ben set the family cabin on fire. Hope says there is no motive for Ben to go after Tripp Dalton (Lucas Adams) and Haley Chen (Thia Megia). Ted wants to share a bottle of wine with Hope and talk about something beside Ben. Ted offers Hope the necklace again, and she refuses. Hope tells Ted she is not the type of woman who moves quickly between relationships.

Hope and Ted go inside and meets Rex Brady (Kyle Lowder). Rex tells them about running into Xander in the morgue. Ted and Hope sit down to eat, Hope has to leave to be with her family. Ted knows exactly what he can do to help Hope. He shows up to question Xander about the report he stole from the hospital. Xander brushes Ted off and closes the door. Ted slips into the mansion and up to Xander’s room. Ted finds the autopsy report in Xander’s room.

Days Of Our Lives Spoilers – Victor Kiriakis Is Understanding

Days of Our Lives Victor Kiriakis (John Aniston) questions when Maggie Kiriakis (Suzanne Rogers) started drinking again. Victor asks Maggie if he drove her to drink. Victor asks if he drove Maggie to drink. Maggie tells Victor it was a combination of things. Victor tells Maggie he loves her and wants to talk later – she agrees. Kate Roberts (Lauren Koslow) joins Victor, she tells him about Maggie’s visit. Victor can’t seem to say the right thing today. Victor doesn’t know if a meeting is enough to help Maggie and asks Kate’s advice. Kate tells Victor that Maggie wants to stop, or she wouldn’t have gone to a meeting. Kate and Victor drink to miracles.

Days of Our Lives Sarah Horton (Linsey Godfrey) tells Xander Cook (Paul Telfer) to go away. Xander tells Sarah he can get Dr. Rolf’s (William Utay) diary for her. Sarah wants to know why Xander would consider giving up the diary if he did have it. Sarah slaps Xander, who tries to convince her that Rex Brady doesn’t deserve her. Sarah and Xander spar back and forth over his shortfalls. Maggie and Brady Black (Eric Marsolf) arrive and demand to know what is going on with them. Sarah tells Xander not to involve Maggie in his sick games. Maggie thanks Xander for their talk last night.

Xander asks Maggie how she is feeling before leaving the room. Sarah wants to know how Xander could possibly help Maggie. Maggie tells Sarah about falling off the wagon. Xander takes out the diary and questions how to play this. Sarah thanks Brady for assisting Maggie. She tells Maggie she has bad news and can’t put off telling her any longer. Xander comes back in and things he has something that will help. Xander hands Maggie Rolf’s diary.

Days Of Our Lives Spoilers – Eric Brady Rushes To The Hospital

Days of Our Lives Eric Brady comes home and looks at his photo album of Nicole Walker (Arianne Zucker) before throwing it across a room. Eric gets Marlena Evans (Deidre Hall) message and rushes to the hospital. Marlena tells Eric that he can’t give up on Nicole.

Eric thinks he should leave Nicole alone and give her time to find some peace. Rex overhears Marlena and Eric talking. Rex tells Marlena and Eric that Will’s test results show nothing promising. Hope arrives and asks how Will is. Eric is sorry about Hope and Rafe Hernandez (Galen Gering).

Days of Our Lives Stefan Dimera (Brandon Barash) can’t imagine what he and Nicole have to talk about, she tells him to invite her inside, and she will tell him. Nicole wants Stefan to promise to keep quiet. Nicole tells Stefan that he is close to Chloe Lane (Nadia Bjorlin) lost all rights to know anything about her life. Nicole wants to talk about Dimera Enterprises.

Days Of Our Lives Spoilers – Finding Comfort In Each Other

Stefan refuses to give Nicole a job, Nicole pulls the Holly Jonas (Harlow and Scarlett Mallory) card claiming that Stefan owes her. He tells Nicole he is making some changes and has offered Abe Carver (James Reynolds) a job. Stefan gives Nicole a job, and they shake hands. Nicole refuses to leave while Stefan talks to his lawyers about the paperwork for Basic Black. Kristen talks to Stefano Dimera’s (Joe Mascolo) portrait.

Days of Our Lives Marlena and Kate discuss Will’s situation and how they just got him back. Marlena hopes that the journal will show up. Marlena tells Kate that John has gone to be with his son but will be back tomorrow. Kate tells Marlena that Lucas Horton (Bryan Dattilo) is taking the next flight out. Sami Brady (Alison Sweeney) will be there as soon.