Days Of Our Lives Spoilers: Will Gets A Chance At Life! Xander Gives Up Dr. Wilhelm Rolf’s Diary To Save Him? 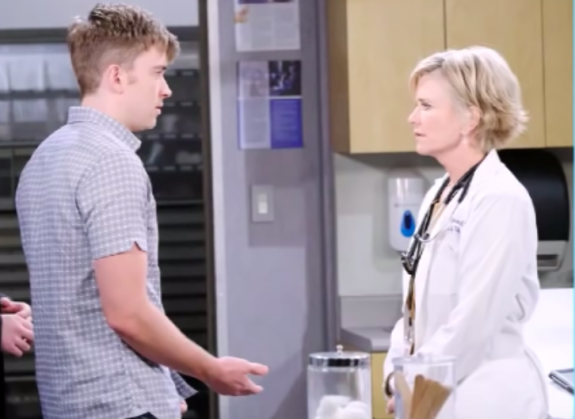 Days of Our Lives spoilers tease that Will Horton (Chandler Massey) will get a chance at life if his care team at Salem University Hospital, which includes Dr Sarah Horton (Linsey Godfrey) is able to develop an antidote from Dr. Wilhelm Rolf’s (William Utay) amnesia formula, which should be in his missing diary.

DOOL Spoilers: Will Horton Will Get A Chance At Life

Xander Kiriakis (Paul Telfer) has had the diary in his possession since stealing it from Eve Deveraux (Kassie DePaiva) several months ago. However, in an attempt to impress Sarah, he will produce it after being questioned by her, Brady Black (Eric Martsolf) and Maggie Kiriakis (Suzanne Rogers) in Friday’s episode of Days of Our Lives.

Xander seems to have truly fallen for Sarah, and he knows if he does something big that will show he is not really the heartless, selfish person that he has been made out to be, and actually has been, it might impress her to give him a chance at romance.

Perhaps he sees in Sarah an innocence and an honesty he wishes was in himself, and she inspires him to make changes towards becoming a better man! So whether he admits he’s had it all along is questionable, but he might have told her that he might know what happened to it and will try to get it.

He may have played dumb as well, and not revealed where he got it but say something like he has a strange book that he found after the warehouse explosion and wonders if it’s what they’re looking for, and he goes to his room and gets it and after Sarah confirms it looks like medical formulas in it, turns it over.

That could be a likely scenario that would keep him from getting in trouble for keeping such a necessary bit of information, enables him to bypass Eve Deveraux (Kassie DePaiva) entirely, and be a hero to Sarah, Will, and the rest of his family and Sonny Kiriakis (Freddie Smith).