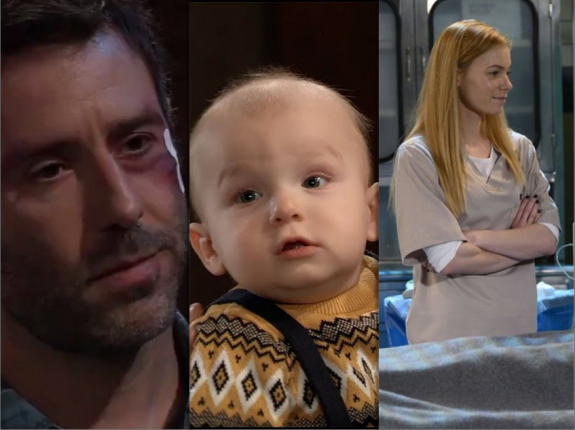 General Hospital spoilers tease that once Nelle Benson (Chloe Lanier) is back in Port Charles, she’ll make a new friend; is it possible her new friend might be Shiloh Archer (Coby Ryan McLaughln)?

GH Spoilers: Nelle Benson Is Back In Port Charles

It makes sense to think that Shiloh might tout his Dawn of Day as an excellent halfway house for out coming prisoners to stay at while they become part of the general public again, although Nelle is more likely to be an escapee than a parolee!

Shiloh might even have “Dawnies” behind bars doing prison outreach with Dawn of Day seminars! Nelle does a good con as a wayward young woman needing a strong male leader to show her the way, the perfect recruit for Shiloh!

It’s not likely that Shiloh will approach her in prison, rather Nelle might approach him needing a place to hide out and one of the Dawn of Day houses might be just the perfect spot. Nelle might have an agenda, however; other General Hospital spoilers tease that Brad Cooper (Parry Shen) may be desperate enough to ask Nelle’s help in keeping Shiloh away from baby Wiley Cooper-Jones (Eric and Theodore) since he’s really Jonah Corinthos, Nelle’s son with Michael Corinthos (Chad Duell).

Of course, Shiloh’s search for his son and Nelle and Brad’s secret might collide, with some ugly fallout for Brad! Nelle’s used to ugly fallout and she’s more often the one who causes it, so she won’t care.

There are a couple of scenarios that could happen with Nelle and Shiloh being friends; since her main agenda, at least back when she swapped Jonah with Brad for the original Wiley, who of course was Shiloh’s baby with Willow Tait (Katelyn MacMullen) who died, was for Michael never to get his hands on their son, she might try to blackmail Shiloh with her information or even kidnap Wiley herself, delivering him to Shiloh!

The other scenario could be that she has decided she wants her baby back, and she’ll pull a con on Shiloh and Brad, and kidnap Wiley and disappear with him!

No matter how this plays out, Nelle coming back to town and Shiloh looking for his baby seem to point to Brad’s house of cards coming down and the truth about the baby swap coming out; stay tuned to General Hospital and keep checking General Hospital spoilers frequently for all the latest news, updates and developments!