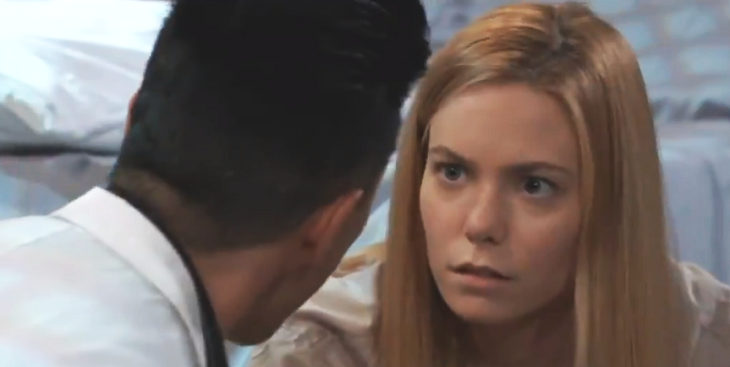 “General Hospital” spoilers for Friday, June 14, tease that Curtis Ashford (Donnell Turner) will offer an idea to Jordan Ashford (Briana Nicole Henry). She won’t look like she’s in a good mood, so she may still be stewing over the kidney drama that went down. However, Curtis may think they should move past all that and concentrate on the positives. Jordan is still alive, and their love story can continue.

Josslyn is hoping to say one last goodbye to Oscar Nero Quartermaine (Garren Stitt), so she needs to make contact with the other side. Once she explains her situation to Lucy, Joss will wonder if she has a way to make it happen.

At Pentonville, Brad Cooper (Parry Shen) will be freaking out over Shiloh Archer (Coby Ryan McLaughlin) and the secret that could unravel. That’s not really Shiloh’s kid or even Willow Tait’s (Katelyn MacMullen) for that matter. Brad may admit some of this to Nelle Benson (Chloe Lanier), which could spark a total disaster.

“General Hospital” spoilers say Nelle will plot her prison getaway soon. Finding out her child is at risk may convince her to take the leap. Before Nelle’s escape goes down, she’ll cross paths with Harmony Miller (Inga Cadranel). GH fans can expect a little conflict between Nelle and her fellow inmate.

Over with Diane Miller (Carolyn Hennesy), she’ll get a call from a rattled Willow. Since Willow was just subpoenaed, she’ll worry this is the beginning of the end. Willow will hate the thought of Shiloh finding out Wiley Cooper-Jones’ identity. Nevertheless, Diane may remind her that subpoena or no subpoena, Shiloh is still going to have a tough battle on his hands.

Elsewhere, Carly Corinthos (Laura Wright) and Sam McCall (Kelly Monaco) will discuss Dawn of Day. It looks like Sam will hear about some money issues, which makes sense considering Shiloh sought money from the offshore accounts. Carly will look delighted when she hears DoD may be going under.

Jason Morgan (Steve Burton) will feel like they have a golden opportunity on their hands. Shiloh is panicking, so their take-down stands a better chance of working. They need to act while Shiloh is freaked out and vulnerable.

Across town, Margaux Dawson (Elizabeth Hendrickson) will deliver a warning to Shiloh. She’ll argue that he’s setting himself up for a colossal fall, but Shiloh will believe he’s just getting warmed up. He may too smug for his own good!