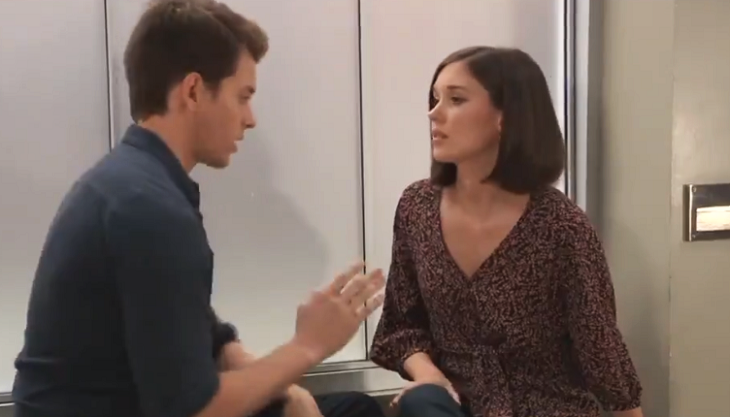 She may have found out that Shiloh Archer (Coby Ryan McLaughlin) may have gotten some leads on their baby, in spite of all the efforts to kill the paper trail by Julian Jerome (William DeVry) and Sam McCall (Kelly Monaco).

Willow herself tried to get Diane Miller (Carolyn Hennesy) to destroy her files but she wouldn’t, trusting in HIIPA and other laws to protect Willow. But what Diane didn’t count on is how many “Dawnies” Shiloh might have in high places, including the county courthouse for Port Charles who will pull those records and give Shiloh copies to impress their cult leader.

The state records are destroyed, but if there are any in General Hospital he likely has those already thanks to the nurse who told him how to get his baby’s birth certificate in Monday’s episode of General Hospital.

Shiloh may have approached Willow again demanding the truth about their baby and where he is, if he managed to get his birth record. And no matter how she denies she may not be able to convince him.

Shiloh best watch his step, Michael’s uncle Jason Morgan (Steve Burton) is ready to shoot to kill Shiloh on sight, and Sonny Corinthos (Maurice Benard) and Julian Jerome (William DeVry) are more than happy to band together with Jason to see that the Shiloh problem is eliminated for good.

General Hospital Spoilers – Taking The Law Into Their Own Hands

Although Willow’s boyfriend Detective Harrison Chase (Josh Swickard) did remind Jason and Sonny not to take the law into their own hands on Monday’s episode. As Franco Baldwin (Roger Howarth) said about another criminal in a recent episode of General Hospital, sometimes the ends really do justify the means.

Michael will likely reassure Willow that there are many who want to protect little Wiley Cooper-Jones (Eric and Theodore) from Shiloh. And they are all around Wiley like a fortress, as well as around Willow if need be on a moment’s notice if possible.

Michael will continue to support Willow if she needs him to, and would throw Shiloh on the floor again or down a flight of stairs like Jason did if necessary! Stay tuned to General Hospital and keep checking General Hospital spoilers frequently for all the latest news, updates and developments!