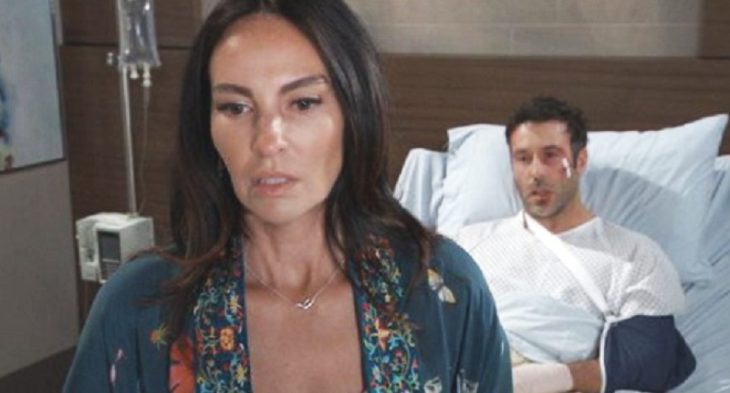 Shiloh was able to weasel out of his charges thanks to one of his brainwashed Dawn of Day followers, namely Harmony, taking the rap for him. And since nothing was on video, there was nothing proving that Shiloh was the perpetrator.

She did confess to Detective Harrison Chase (Josh Swickard) that she was the one who drugged the initiates. She can’t however, take the rap for the rapes and be believable!

General Hospital Spoilers – None Of The Evidence Is Any Good

Since none of the evidence that Sam McCall (Kelly Monaco) and Jason Morgan (Steve Burton) tried so hard to get to bring Shiloh down, Sam even coming just short of being raped by the slimy predator, is any good thanks to Harmony’s big mouth, maybe they will decide to put the focus on her instead and look for more involvement besides just being an accessory to Shiloh’s crimes.

It’s entirely possible that Harmony is waiting for Shiloh to come bail her out of jail as well, and since no more spoilers through June 21 say anything about her, Shiloh may not care enough about her to either bail her out or to get her a lawyer. She might just have to wait for arraignment and request a public defender.

However, if Harmony does stay locked up, this may give Jason, Sam, and possibly Chase some time to investigate the Beechers Corners Dawn of Day house.

Even though Shiloh admitted to Harmony in a recent episode that he had destroyed the pledges, it’s possible, since she was seen with the member files in a General Hospital episode a couple of months ago that even if Shiloh didn’t think to keep copies, maybe Harmony did and they are at Beecher’s Corners.

#GH writer shakeup in the works, according to the latest reports. Are you surprised, #GeneralHospital fans?https://t.co/SPQ6cFeDZR

The only problem is, as Diane Miller (Carolyn Hennesy) told Willow Tait (Katelyn MacMillan) on Monday’s episode, evidence gathered illegally cannot be used in a court of law, and the only way Jason and Sam could get their hands on any pledges would be to steal them!