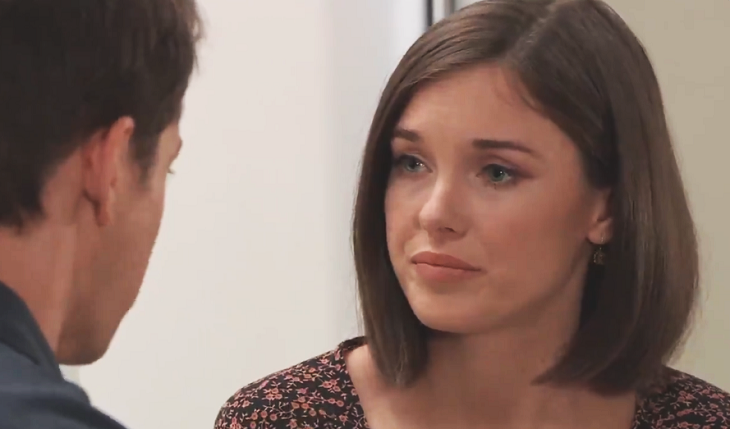 General Hospital spoilers tease that there is much more to the story of Willow Tait’s (Katelyn MacMullen) father than meets the eye. Some General Hospital fans think her father is Dr. Neil Byrne (Joe Flanigan), because he has a wife and daughter that are no longer on the scene. He was also hesitant about trying cult exit therapy because of a prior disastrous experience, but that doesn’t make any sense.

These fans point to Harmony Miller (Inga Cadranel) being the wife and Willow being the daughter. If this had happened when Willow was a small child or a baby not old enough to have known her father, then it may have made sense.

But Dr. Byrne and Willow saw each other when Kristina Corinthos-Davis (Lexi Ainsworth) was in the Corinthos safe house beginning the exit therapy and there was no hint of recognition between them.

When Willow told her boyfriend, Detective Harrison Chase (Josh Swickard) about her father’s passing, it seemed like there was more to the story. Although it could have just been that the grief is still fresh, and she couldn’t say the word “died”.

It almost seemed like her father took his own life, or she may have just been told that he did, and he could reappear. Or he could even have been murdered by Shiloh Archer (Coby Ryan McLaughlin) or one of his “Dawnies”.

There is one possibility of an indirect connection between Willow, Harmony, and Willow’s father, and that is that he could have gone to Dr. Byrne himself as a patient. But Harmony and Willow undoubtedly would have been part of his needing therapy, even if Dr. Byrne didn’t try exit therapy on Willow, who obviously doesn’t need it now, or Harmony, unless this happened long, long ago.

However, Willow’s father could have come to Dr. Byrne seeking his help, like Sonny Corinthos (Maurice Benard) did for Kristina. Dr. Byrne, although seeming brusque and detached at times, as psychiatrists have to do out of self-protection for their own hearts and psyches, seems to have a healer’s heart.

If he had tried exit therapy on them with it being unsuccessful and the father taking his own life because of it, of course he’d be hurt over it and be hesitant to try it again with another family! In this scenario, whatever happened to his own wife and daughter would be a separate incident, although it is possible that they too went into Dawn of Day or perhaps another cult.

#GH writer shakeup in the works, according to the latest reports. Are you surprised, #GeneralHospital fans?https://t.co/SPQ6cFeDZR

Either way, there seems to be more to both the stories of what happened to Willow’s father and Dr. Byrne’s wife and daughter. Stay tuned to General Hospital and keep checking General Hospital spoilers frequently for all the latest news, updates and developments!