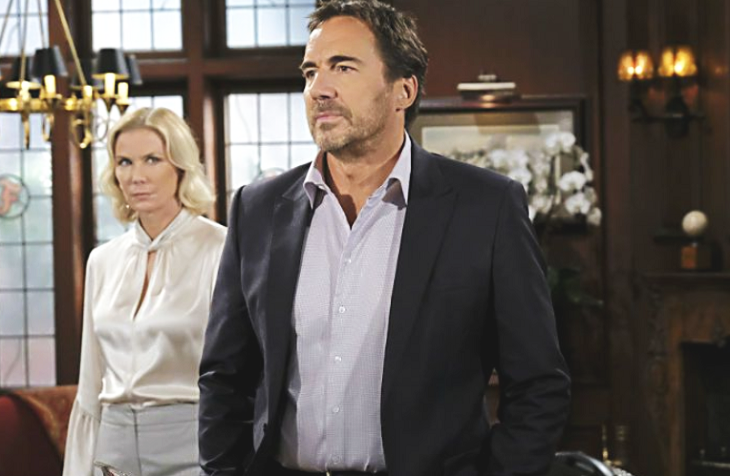 The Bold and the Beautiful spoilers tease that Ridge Forrester (Thorsten Kaye) will have a lot on his mind in the coming days. He and his wife Brooke Forrester (Katherine Kelly Lang) have had a rocky time in the past over their children, and it looks like they’re headed down that road again.

As B&B viewers know, Hope Logan (Annika Noelle) just ended her marriage to Liam Spencer (Scott Clifton), and Brooke is not at all happy about it. Brooke was Hope and Liam’s biggest champion. She wanted them together from the start, and she worked hard to further their union along. She thinks their annulment was a huge mistake, and she’s devastated over the turn of events.

But for Ridge, the end of Lope’s marriage means a possible new beginning for Steffy Forrester (Jacqueline MacInnes Wood) and Liam. Ridge has wanted Steffy and Liam together from the get-go, and now there’s the chance that the two of them could reunite and form a happy family with Kelly Spencer (Chloe Teperman and Zoe Pennington) and Phoebe Forrester (River Davidson and Madeline Valdez).

Bold And The Beautiful Spoilers – Brooke Forrester Is Unhappy

According to B&B spoilers, Ridge will soon become very concerned about the effect of Hope and Liam’s annulment on his own marriage. Brooke’s not going to be happy about the fact that Liam has moved into Steffy’s house. She might even accuse Steffy of trying to get her claws back into Liam before the ink is even dry on his annulment from Hope, and that would certainly irk Ridge.

And then there’s the issue of Thomas Forrester (Matthew Atkinson). Thomas virtually orchestrated Lope’s split, and Brooke doesn’t like how involved he is with Hope. And according to B&B spoilers, Thomas will keep working on Hope, trying to secure her as a permanent mother-figure for Douglas Forrester (Henry Joseph Samiri) and a partner for himself.

And knowing Brooke, she’ll let Ridge know how displeased she is with both Steffy’s and Thomas’ actions. The way Brooke sees it, Thomas and Steffy have interfered where they shouldn’t have, and she’ll likely blame them in part for the demise of Lope’s marriage. Ridge won’t see it that way, and this will cause strain on Bridge’s marriage.

Of course, it wasn’t that long ago that Brooke and Ridge made a vow to stay out of their children’s lives for the sake of their own marriage. But that’s easy to say when things are going well for one’s kids, and hard to put into practice when one doesn’t like how things have worked out…which is exactly where Brooke is right now.

We’ll see how this whole situation ultimately affects Bridge’s marriage. Chances are, Brooke will come to accept that Liam and Hope have gone their separate ways, but it will probably take some time for her to get there. But just wait until the baby switch secret is revealed – we should see some big time conflict between Ridge and Brooke then!

As always, more detailed spoilers and a full collection of pictures for the week in question will appear here on Hollywood Hiccups where there will be more clues and hints over exactly what’s going on.