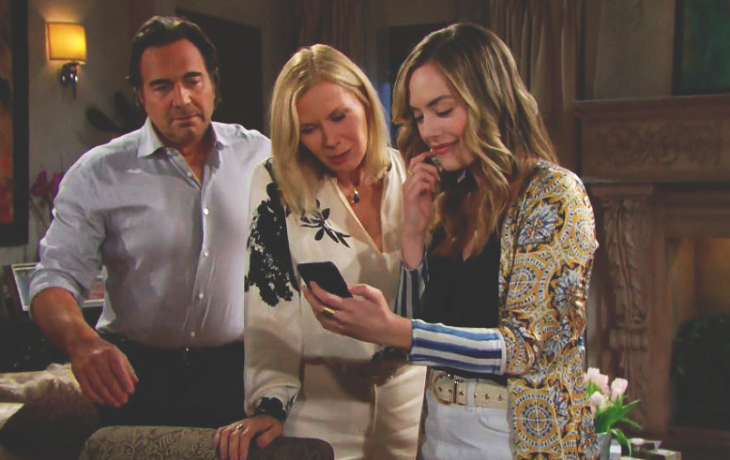 The Bold and the Beautiful spoilers for Monday, June 17, tease that Hope Logan (Annika Noelle) will find herself distraught. As B&B viewers know, she asked Liam Spencer (Scott Clifton) to send her some photos of him with Kelly Spencer (Chloe Teperman and Zoe Pennington) and Phoebe Forrester (River Davidson and Madeline Valdez). And one photo in particular – a beautiful close-up of Phoebe – captured her heart.

But then along came Thomas Forrester (Matthew Atkinson), who promptly discouraged Hope from looking at the photo and then secretly deleted it from her phone. Of course, Thomas knows that Phoebe is really Hope’s daughter Beth Spencer, and now that he’s determined to keep the truth from Hope, he wants Hope to forget all about Phoebe.

But according to B&B spoilers, Hope will quickly notice that the precious photo of Beth is missing from her phone, and she’ll get upset. Hope feels a certain closeness to Phoebe since Phoebe is her daughter, but of course Hope doesn’t know that. She thinks she feels a bond with Phoebe because Phoebe is her cousin Florence “Flo” Fulton’s (Katrina Bowden) biological daughter.

Bold And The Beautiful Spoilers – Realizes The Photo Is Gone

Regardless, look for Hope to experience some discomfort as she realizes that the photo is gone. In many ways, the photo represents Hope’s last link to Phoebe, especially since she really doesn’t have a reason to be around the little girl now that her marriage to Liam is over. It should be an upsetting time for Hope.

The Bold And The Beautiful Spoilers: The Beth Secret Takes A Deadly Turn– A Death Rocks B&B June 24-28 https://t.co/ifr6ucOezb pic.twitter.com/mgzxZa9CL2

Meanwhile, on Monday’s new episode of B&B, Brooke Forrester’s (Katherine Kelly Lang) suspicions about Thomas and his motives will develop further. Brooke recently told Ridge Forrester (Thorsten Kaye) that she was unnerved by Thomas and his intense interest in Hope, and on Monday’s episode she’ll witness something that will take her concerns to a new level.

The Bold and the Beautiful spoilers say that Brooke will discover how Thomas is using his young son Douglas Forrester (Henry Joseph Samiri) to help him ingratiate himself to Hope. As B&B viewers know, Thomas wants nothing more than to win Hope for himself, and he’s not beyond using Douglas as a pawn in that endeavor.

Bold And The Beautiful Spoilers – Holding Out Hope For Lope

But Brooke won’t appreciate Thomas’ efforts, nor his willingness to use an innocent child to get what he wants. Of course, Brooke is holding out hope that Hope and Liam will find their way back to each other, so she won’t like the situation unfolding with Thomas, and she’ll want to do something to stop it, but it’s a complicated situation, especially since Thomas is Ridge’s son.

We’ll see whether Brooke voices her concerns to Ridge about the whole situation. Surely, she’ll feel that she has to take action, but exactly what will she do? B&B viewers will have to watch to find out!

It sounds like a lot of B&B drama is heating up for Monday’s episode, so stay tuned! We’ll give you updates as B&B news comes in. Stick with the CBS soap and don’t forget to check CDL often for the latest Bold and the Beautiful spoilers, updates, and news.