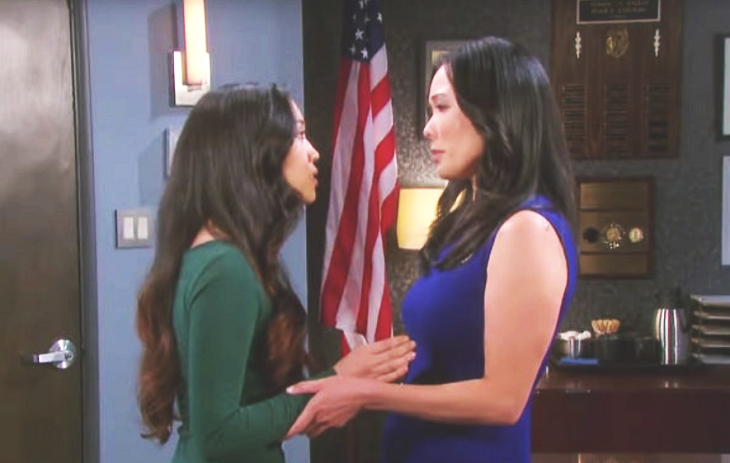 Xander comes back into the room, and Brady demands answers. Xander tells Brady he did it for love. Brady doesn’t like that Xander made Maggie think he’s a good guy. Brady tells Xander this isn’t over. Eve Deveraux (Kassie DePaiva) arrives and asks Xander what he was thinking. Eve wants to know if Xander told anyone the diary came from her. Eve finds it hard to believe the Xander didn’t tell the truth. Xander points out that Eve owes him now.

Days of Our Lives Spoilers: Kristen Enraged When Ted Reveals The Truth About Holly to “Nicole”

Days Of Our Lives Spoilers – Eve Deveraux Is Concerned

Days of Our Lives Eve tells J.J. Deveraux (Casey Moss) and Haley Chen (Thia Megia) that she will be taken into custody as soon as her paperwork is done. Eve walks past the nurse’s desk, Kayla Johnson (Mary Beth Evans) asks Eve how she lives with herself. Kayla wants to know how Eve lives with herself, knowing Will is dying. Maggie and Sarah arrive at the hospital with the diary. Eve asks Maggie is Xander said where he got the journal.

Maggie tells Eve its none of her business, but Xander didn’t say. Maggie asks Eve what has happened to her; Eve doesn’t have the time and walks off. Kate Roberts (Lauren Koslow) walks up to Maggie at the nurse’s desk and tells Kate that Will has hope thanks to Xander. Maggie goes to Will Horton’s (Chandler Massey) room to tell him they found the diary. Kayla says they have made the drug and are working on an antidote, but they are running out of time.

Days of Our Lives Melinda Trask (Laura Kai Chen) comes barging into Haley’s room and tells her she is working on the green card application. Melinda says the application can still take years and she will have to fight for her right to return. Melinda plans to go with Haley to China. Melinda found an apartment for them in China and has put in applications at several hospitals for Haley. Haley is confused that Melinda has done this. J.J. asks Haley how he can apply for a green card in China.

Days Of Our Lives Spoilers – Ted Laurent Makes A Confession

Haley doesn’t want J.J. to do that. Haley tells J.J. that he saved her life, J.J. says she saved him too. Haley doesn’t want J.J. to wait for her, J.J. doesn’t want anyone else. Haley tells J.J. they weren’t meant to be, she has to leave, and he has to let her go. Haley needs J.J. to promise him that he won’t do anything to get in trouble with the law. Haley says I love you in Chinese. Haley is placed in cuffs, and she and Melinda leave.

Days of Our Lives Ted Laurent gets the file from Xander’s room and calls Nicole Walker (Arianne Zucker) to tell her the good news. Kristen Dimera (Stacy Haiduk) hangs the phone up; she doesn’t have time to get distracted. Gabi Hernandez (Camila Banus) walks in and hears Nicole says she is back where she belongs. Kristen covers saying she’s been hired at Dimera to run Basic Black. Gabi doesn’t understand why Stefan Dimera (Brandon Barash) would revive the company; they would be doing the same thing.

Gabi goes to speak with Stefan. Kristen asks Ted what he wants and hangs up on him. Nicole tells Gabi about Abe Carver’s (James Reynolds) job offer and that he will probably fire her. Ted arrives and tells Nicole that Holly Jonas (Harlow and Scarlett Mallory) is alive. Ted shows Nicole the autopsy report and says the DNA doesn’t match Holly. Ted wants to give Hope Brady (Kristian Alfonso) the good news, Nicole says no. Kristen knocks Ted out with a fireplace poker.