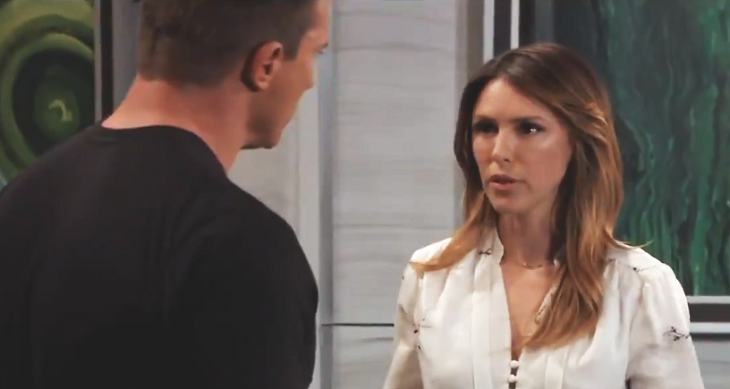 Jason can’t believe Shiloh Archer (Coby Ryan McLaughlin) is walking around free after everything they have been through because of him. Sam tells Jason that she and Julian Jerome (William DeVry) got rid of the paper trail to Wiley Cooper-Jones (Theo and Erik Olson). Sam hopes that Willow Tait (Katelyn MacMullen) doesn’t mess up.

Carly Corinthos (Laura Wright) tells Sam not to concentrate on the worst-case scenario; Sam says he isn’t she just wants to be prepared for defense. Sam tells Carly what she and Julian did. Sam says Shiloh is leaning on DOD to back him up and that is also his Achilles heel. Carly believes they can set back and watch DOD fall apart. Jason points out that Shiloh will come after the baby harder than ever. Margaux shows up and asks to speak to Jason.

General Hospital’s Sam distracts Carly and asks how Jocelyn Jacks (Eden McCoy) is. Carly says it’s great the Jasper Jacks (Ingo Rademacher) is back. Sam understands what Carly means about doing anything to help your child. Sam tells Carly she is there for her if she needs to talk. Carly tells Sam she’s afraid there is something wrong with the baby. Carly tells Sam about the test results that could indicate birth defects.

Sam tells Carly she needs to calm down and stop worrying. Sam asks Carly if she has told Sonny and realizes she hasn’t. Carly tells Sam she hasn’t told Sonny. Carly doesn’t think Sonny needs any more worries. Carly wants to wait until she knows for sure. Jason returns and asks what he missed. She says she and Sam need to talk more. Jason senses that something is going on with Carly, but Sam stops him for going after her.

General Hospital’s Willow is served with papers to meet Shiloh in family court. Shiloh is there when Willow gets the papers, Michael Corinthos (Chad Duell) goes after him, Shiloh leaves. Willow wants to go after Shiloh and through the papers in his face. Willow says Shiloh knows the baby survived. Michael asks if the proof was obtained legally. Willow calls Diane Miller (Carolyn Hennesy), but she isn’t in, Michael calls her private line and hands Willow the phone. Diane tells Willow she has to go to court. Willow goes to visit Harmony who says she’s being sent to Pentonville.

General Hospital’s Jordan Ashford (Briana Nicole Henry) is going over her medical bills. Curtis Ashford tries to stop her. Curtis gives in and sits with Jordan. Jordan hands Curtis the papers; he says no one can afford to be sick. Jordan is afraid they will lose their home because of her sickness. Curtis tells Jordan he has this. Curtis tries to reassure Jordan. Jordan agrees to let the bills wait, she and Curtis will do this together.

General Hospital’s Margaux Dawson (Elizabeth Hendrickson) is with Lucy Coe (Lynn Herring) discussing the sale of her property. Shiloh arrives and questions Margaux. Shiloh tells Margaux he is just getting warmed up. Margaux points out that people are leaving DOD left and right. He tells Margaux she will be back to DOD in the future and they will be waiting. Jocelyn Jacks (Eden McCoy) approaches Lucy and asks how to contact someone that has passed over. Lucy thinks it is too soon for Jocelyn to try a séance. Michael arrives at Kelly’s to speak to Shiloh.

Shiloh tells Michael he will have a new DOD member soon. Lucy tries to explain to Jocelyn that Oscar Nero Quartermaine (Garren Stitt) wants her to live her life without him. Shiloh asks Michael what this relationship with Willow is. Michael tells Shiloh that he Willow has several friends including him. Shiloh says he has to get back home, Michael informs Shiloh that he bought the DOD house. Shiloh wishes Michael luck breaking the lease that he has on the DOD house. Lucy promises to talk to Jocelyn soon.

General Hospital’s Brad Cooper (Parry Shen) shows up at the infirmary to visit Nelle Benson (Chloe Lanier). Nelle asks Brad if something is wrong with the baby. Brad tells Nelle that the birthmother has been poking around in their lives. Brad tells Nelle that the original baby’s father is coming after him, and he’s about to lose everything. Brad shows Nelle a picture of Wiley; she wants to know if Michael is over her. Nelle tells Brad she won’t interfere if someone else tries to get Wiley. Nelle tells Brad she could be up for early parole and may want a part in her child’s life, Nelle asks if Brad would be up for that. Nelle tells Brad to calm down; she’s his greatest ally. Harmony is Nelle’s new roommate.