Kate Middleton Envies Meghan Markle Over This One Thing 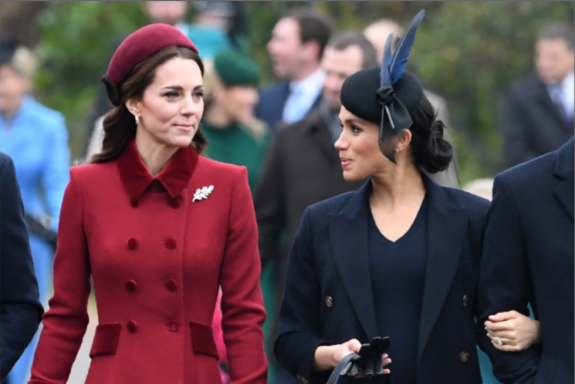 It looks like Kate Middleton is indeed a little jealous of her sister-in-law Meghan Markle. And that’s not because she’s got a better wardrobe, is more popular with royal fans or gets more attention in the headlines.

Kate Middleton Is A Little Jealous Of Meghan Markle

At least, not to our knowledge. Instead, there’s a new report that says the Duchess of Cambridge envies Meghan and what kind of natural she is in front of large crowds at their royal engagements. Here’s what you need to know.

According to US Weekly, Kate Middleton couldn’t help but notice that Meghan Markle always looks like she is at ease whenever she’s in front of a large crowd. Of course, it probably helps that she is a former Hollywood star who is used to being in front of people and the cameras all the time. While Kate still struggles with public speaking and being the center of attention, it’s something that Meghan does without a problem at all.

Meghan Markle Always At Ease When In A Crowd

One insider even told the publication, “Kate still finds these huge public events overwhelming. She’s always been naturally shy. Truth be told, she envies her sister-in-law Meghan’s ease in front of crowds.”

But if there’s one thing that the Duchess of Cambridge is good at, it’s faking it until she’s making it, so to speak. The insider went on to say that the royal mother-of-three is good at impressing “everyone with her ability to paste a huge smile on her face,” adds the insider. “She knows she has a responsibility to be front and center, given that one day these events will be in honor of her husband. It’s something she’ll have to work at for the rest of her life.”

Today The Duke and Duchess of Sussex joined The Queen and members of The Royal Family at the annual Trooping the Colour, to celebrate Her Majesty’s official birthday. Trooping the Colour orginated from traditional preparations for battle and has commemorated the birthday of the sovereign for more than 250 years. In the 18th century, guards from the royal palaces regularly assembled to “troop" colours or flags down the rank, so they could be seen and recognised by the soldiers. In 1748, it was announced this parade would also mark the Sovereign’s official birthday. Trooping the Colour is performed by regiments of the British and Commonwealth armies for The Queen’s birthday parade, allowing them to pay a personal tribute to Her Majesty. Today over 1400 parading soldiers, 200 horses and 400 musicians came together on Horse Guards Parade in London in a great display of military precision, horsemanship and fanfare. The parade concludes with a 41-gun salute fired by The King’s Troop, following which The Queen leads members of The Royal Family back to the balcony of Buckingham Palace to watch the Royal Air Force flypast display. Photos credit: PA

Meanwhile, it appears as though Queen Elizabeth has been spending more time with Kate Middleton behind the scenes. That’s because she wants to make sure that the future Queen Consort is prepared for her role, especially when her husband Prince William takes the throne. They might have many years ahead of them, but it’s never too early to prepare.

“She’s really taken Kate under her wing,” a source told Us. “The two of them will often spend hours discussing royal life and the future of the monarchy.”