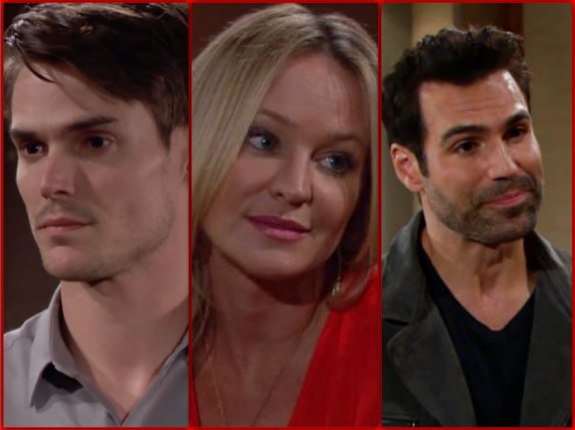 The Young and the Restless (Y&R) spoilers tease that Sharon Newman (Sharon Case) will inch closer to Adam Newman (Mark Grossman) in the weeks ahead. It will set Rey Rosales’ (Jordi Vilasuso) jealous off, putting Sharon in the middle.

Even though Sharon wants to deny her feelings for Adam, it’s clear that she feels something for him. And, the more she tries to deny it, the stronger her connection seems to be.

Rey has picked up on the fact that Adam has gotten in Sharon’s head. She can try to deny it all she wants but she is drawn to him and she seems to genuinely care for him.

Y&R Spoilers: Rey Rosales May Be Right To Worry About Adam Newman

The fact is, Rey might be in the right to worry about Adam and Sharon. Y&R spoilers tease that Adam has found a way to get into Sharon’s head again. And, that could be a recipe for disaster.

The last time they were together, they were a toxic mess. They seemed to feed off each other in this weird way and it was downright destructive. Y&R spoilers state that Sharon was diagnosed with bipolar disorder, which provided a path from Adam.

So, when you consider that she is back in Adam’s orbit, it’s easy to see why Rey and Nick Newman (Joshua Morrow) are worried about her. In addition to genuine worry, Rey is feeling some pangs of jealousy when he hears about their history together.

This is a loaded question. Of course, Sharon loves Adam. They had a connection, a real connection, something she has never been able to find with anyone else. The flip side of that connection is they had a toxic relationship and sometimes, it was very bad for her.

Michael demands the truth from Kevin today on #YR. pic.twitter.com/ttw04jWTOC

As time goes on, her love for Rey may decrease as her love for Adam rekindles. If that happens, Rey won’t stand a chance in this love triangle. Sharon and Adam’s bond will be unshakeable.

The question is, is Adam using Sharon or does he really care for her? That is something we will have to wait and see over the next few weeks to see how Y&R plays out.