‘The Young and the Restless’ (YR) Poll: Which Brother Are You Rooting For? Team Adam or Team Nick? 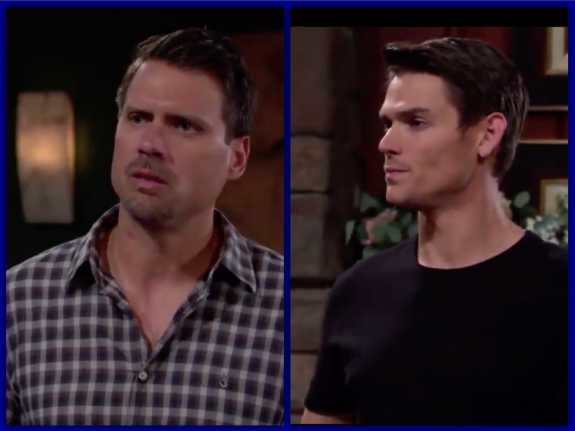 Adam Newman (Mark Grossman) and Nick Newman (Joshua Morrow) are intense sibling rivals on ‘The Young and the Restless’. But which character are you rooting for?

In recent times, Nick decided to have a mask created that made him appear to look exactly like J.T. Hellstrom (Thad Luckinbill). He did that while his father was recovering from a brutal fight with J.T. that took place at the Newman ranch and after Luckinbill’s character than attempted to kill Victor Newman (Eric Braeden) while he was recovering in the hospital.

With Victor in a lessened physical and mental state, Nick poached Newman Enterprises’ employees and played off his dad’s contacts to create Dark Horse, a company intended to battle the family business.

But it must be said that Nick has been there for his children, Noah Newman (Robert Adamson), Summer Newman (Hunter King), Faith Newman (Alyvia Alyn Lind), and Christian Newman (Jude and Ozzy McGuigen), who’s actually his nephew.

It’s still a mystery as to how Adam (as then played by Justin Hartley) escaped the cabin blast. He supposedly wound up on a freight train and exited near to Las Vegas, Nevada. From that jumping off point and without his memory, Adam morphed into a professional poker player known as ‘Spider’.

Adam has regained his memory since coming home. But that only occurred after Chloe Mitchell (Elizabeth Hendrickson) shot him. He then kidnapped her in reprisal and told Kevin Fisher (Greg Rikaart) that he has no knowledge of Chloe’s whereabouts. Adam also used Phyllis Summers (Gina Tognoni), who Kevin kidnapped, to push the Newman family’s buttons.

Adam just learned that Chelsea Lawson (Melissa Claire Egan) remarried during the time he was believed to be dead. His first-born son, Connor Newman (Gunner and Ryder Gadbois), has also been adopted by whoever Chelsea is linked to.

Young And the Restless Spoilers: Adam Newman’s Actions Are Questionable

The attempted trade of Dark Horse’s debt, which Adam purposely purchased with part of the fifty million he accepted from Vickie Newman (Amelia Heinle) under false pretenses to leave town, for Christian surely wasn’t ethical. His interactions with Sharon Newman (Sharon Case) are also questionable.

Adam’s recent rap sheet is longer than Nick’s, but that doesn’t necessarily make him the lesser man. Determining which team one is on with these choices isn’t easy, but is worth considering because both characters are key players in Genoa City, Wisconsin.

Fans of ‘The Young and the Restless’ rightfully express their opinions on a regular basis. So, are you team Adam, team Nick, or team neither? Please vote in our poll below!