Young And The Restless Spoilers: Rey’s Jealousy Grows – Adam Splits Up Sharon And Her New Man? 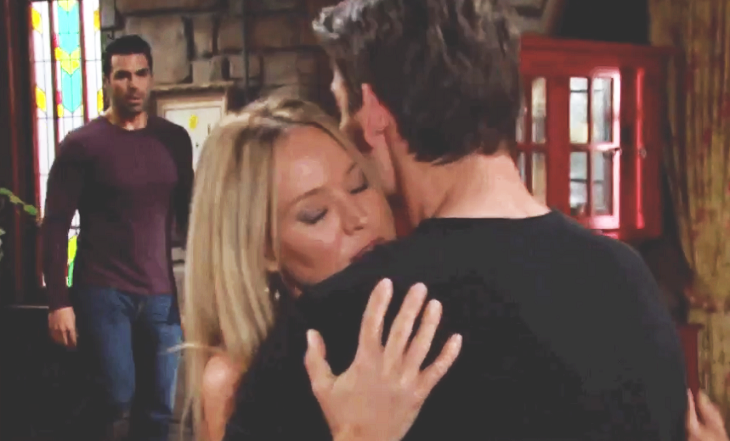 The Young and the Restless (Y&R) spoilers tease that Adam Newman (Mark Grossman) will reel Sharon Newman (Sharon Case) in. At this point, Sharon thought she was helping Adam. She had no idea that he had feelings for her.

Sharon thought he still loved his wife—which he does. It’s clear, Adam is trying to manipulate her. The question is, will she catch on before she throws her relationship with Rey away? Here’s what we know about what’s ahead on Y&R.

If Adam is one thing, that would be smooth. He is really good at reeling Sharon in, getting her to help him, and then upping his charm to get what he wants. There is no reason to think this is any different.

It’s unlikely that Adam really wants to reunite with Sharon. He wants to use her in a sick game to make Chelsea Newman (Melissa Claire Egan) jealous or to get under Nick Newman’s (Joshua Morrow) skin.

Sharron is blindsided by Adam’s confession. She hadn’t considered a relationship with him. Y&R spoilers state that she did care for him a lot at one time but he left her for Chelsea. And, at the time, that hurt her quite a bit because Adam was the one person she could always depend on.

Is it enough for her to leave her secure relationship with Rey Rosales (Jordi Vilasuso) to the unknown with Adam? Would he be honest with her and not try to use her in his twisted game with Nick? These are all great questions and possibly ones Adam would never be able to answer honestly.

The fact is, Rey has a serious disadvantage on this. He has only known Sharon for a year. Adam has a complete history with Sharon, even if it isn’t all pretty. They shared something amazing. And, at times, it was completely toxic. But overall, they really loved each other in a way that Rey cannot comprehend.

This is where Rey must play his cards right. If he isn’t careful, he will send her straight into Adam’s arms. The Young and the Restless spoilers tease that Sharon will consider what Adam had to say and she will find herself drawn to him. She will try to resist, but their chemistry is off the charts.

It sounds like Rey may be getting his heart broken again. Sharon and Adam may unite just in time for Chelsea to pop up. The question still remains, will Chelsea want to reunite with Adam or will she want Nick instead?