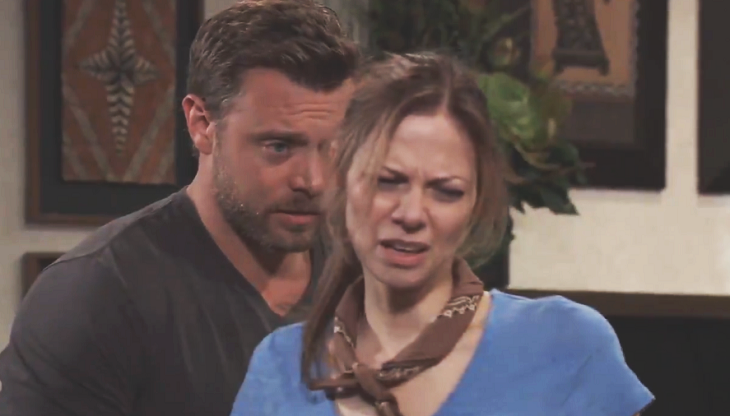 General Hospital spoilers tease that Dr. Kim Nero (Tamara Braun) could be pregnant. On Wednesday’s General Hospital episode, Kim fainted in Drew Cain’s (Billy Miller) arms after they had scattered their late son Oscar Nero Quartermaine’s (Garren Lake Stitt) at the summit of Mount Kilimanjaro, as he had requested.

If Kim is pregnant, she could have been planning it in her grief over Oscar and slipped up on her birth control intentionally. However, she has been avoiding sleep too, and in her right mind she would never neglect her health like that and certainly not if she were carrying a new little one.

But with the extreme grief she has been experiencing, it’s possible. Another way this could play out is that she will try to become pregnant after returning to Port Charles. General Hospital viewers can assume if she is currently pregnant it would be Julian Jerome’s (William DeVry).

But then again, she and Drew have gotten a lot closer too, and General Hospital viewers have saw the two kissing a couple of times. Oscar certainly wished for his parents to reconcile, so it’s a distinct possibility.

Other General Hospital spoilers tease that Elizabeth Baldwin (Rebecca Herbst) will offer Kim her condolences later in the week. Oscar has been gone over a month, so General Hospital viewers would assume that she would have offered condolences for Oscar long before now.

It would be beyond heartbreaking to think that so soon after Oscar’s passing that Kim might be pregnant and miscarry, but it could be a possibility. All the usual soap opera signs of a pregnancy are there, and although a miscarriage would be sad, it certainly would be soapy.

If this is the case, it would be very early in Kim’s pregnancy, as she certainly hasn’t told anyone yet. She couldn’t be much more than four or five weeks along and perhaps she hasn’t even taken a pregnancy test yet.

Is Kim pregnant, will she miscarry, or will she try to get pregnant? Or, could she even hallucinate a false pregnancy? Stay tuned to General Hospital and keep checking General Hospital spoilers frequently for all the latest news, updates and developments!