General Hospital Rumors: Ryan’s Midlife Crisis And Nelle’s Daddy Wound; Will They Fall For One Another? 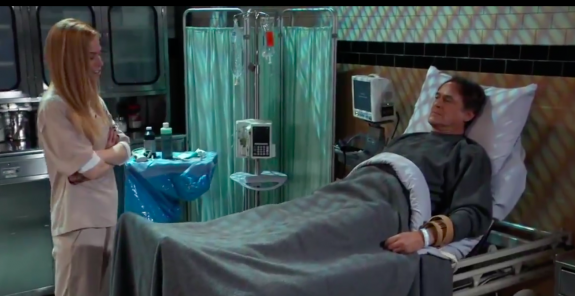 General Hospital spoilers tease that Ryan Chamberlain (Jon Lindstrom) and Nelle Benson (Chloe Lanier) might have been brought together by fate, as Ryan told her in Thursday’s General Hospital episode and indeed become very important to each other.

Ryan’s remarks to Nelle could have been taken as flirting, and Nelle has a deep, dark Daddy wound in her heart. Ryan’s old enough to be Nelle’s father! Could Ryan’s apparent midlife crisis and Nelle’s Daddy wound lead to the two falling in love with one another?

Ava Jerome (Maura West) was younger than Ryan too, but not young enough to be his daughter, considering Kiki Jerome (Hayley Erin) was in her mid-twenties when she died. Nelle is about the same age as Kiki, and even more evil than Ava is! Ava has killed, and Ava has been vengeful, but she’s no sociopath like Nelle – and Ryan – are! Ava was involved in the mob and that makes a difference, killing was just part of that life. This could start with Ryan somehow getting word back to Ava that she’s been replaced with a younger model, just to spite her!

Nelle, on the other hand, hates Frank Benson (uncast actor) and especially for his selling one of her kidneys when she was a child, which caused her physical problems as she was growing up, and her mother wasn’t mentioned other than as Frank’s second wife.

So Nelle has a huge Daddy wound in her heart, and Ryan might fill that gap; it’s said that women marry men who are like their dad, but women who hate their dad tend to marry men old enough to be their dad although they view them as the dad they wish they had! Nelle obviously doesn’t hold Ryan’s many years of murders of women against him; she knew who he was, and even knew he was missing a hand!

She may feel that Ryan understands her without judgment and Ryan will probably feel the same way about her! This could lead to an unlikely romance between the two! Stay tuned to General Hospital and keep checking General Hospital spoilers frequently for all the latest news, updates and developments!