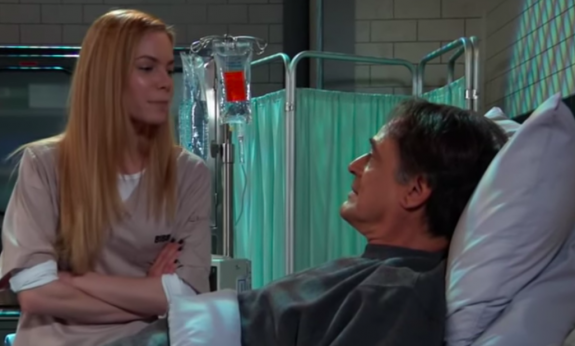 In Friday’s General Hospital episode Brad Cooper (Parry Shen) poured out his heart to Nelle in a prison visit, letting her know that his life was about to fall apart because of Shiloh Archer (Coby Ryan McLaughlin) having been the original baby’s birth father, and possibly will seek custody of Wiley. He won’t know what to do and felt like his and Lucas Jones’ (Ryan Carnes) birth mother needs to know what’s going on!

He may even be planning to admit to the baby swap to keep Shiloh away at the risk of losing Lucas! She definitely wanted to keep Jonah’s true identity a secret but she mentioned she may be coming up for parole soon and wanted to spend more time with Wiley. Brad didn’t take that too well!

Of course, Nelle won’t want to go along with any plan that reveals the baby as Jonah Corinthos, but she might come up with a plan to scam Shiloh out of some money, playing on his desperation, and that could finance Ryan and her going on the run, even if the baby were in tow.

She might be able to convince Ryan to go along with this plan to kidnap Wiley since even though he’s a vile sociopath and murderer otherwise, he does love children and babies! Longtime General Hospital viewers will recall his kidnapping Georgie Jones (Alana and Marina Norwood) as a baby and calling her “Celeste” meaning “angel”.

Even though Nelle asked Brad a lot of questions about if Michael were still interested in her, and mentioned being in Wiley’s life, that doesn’t mean that she means in Port Charles! Nelle’s plan could involve approaching Shiloh with information about Wiley, for a price, and then kidnapping him and either setting Shiloh up to take the fall for it or killing Shiloh, or both, after getting the money in cash!

Harmony Miller (Inga Cadranel) was brought to Pentonville Prison at the end of Friday’s episode, and Nelle might get even more intel about Wiley out of her, and put two and two together about Harmony being the grandmother of the dead baby.

She’ll have time to get to know her better since she’s her new cellmate. Nelle might even pull a double scam telling Brad that she would get Wiley to a place that would be safe from Shiloh and return him to Brad later after Shiloh is no longer a threat; but never return him, of course!

Of course, if she kills Shiloh she’ll probably set up Ryan to take the blame for it, but Nelle doesn’t realize who she’s messing with if she tries to frame Ryan for it! On the other hand, Harmony might bust and run with them and be part of the plan! Stay tuned to General Hospital and keep checking General Hospital spoilers frequently for all the latest news, updates and developments!