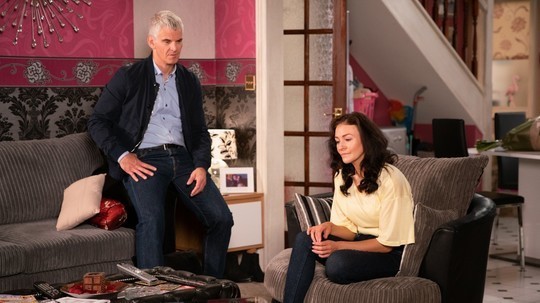 Coronation Street spoilers indicate that yet another death might soon rock Weatherfield in the coming weeks. That’s because there’s new speculation that Tyler Jeffries (Will Barnett) might take his ultimate revenge out on Robert Preston (Tristan Gemmill). And if there is one person who is going to be in the middle of all this, it’s Michelle Connor (Kym Marsh). Here’s what you need to know.

Robert has been trying to keep his relationship with Tyler’s mother Vicky Jeffries (Kerri Quinn) under the radar, even though she is now expecting his baby. At the same time, he’s also sparked up another romance with Michelle. Because he and Michelle have reunited, he’s decided to pull the plug on his secret affair with Vicky.

However, Vicky is not about to take things lying down. Sure, she’s devasted that Robert has left her for another woman – and while pregnant, no less. But for Michelle, it won’t be much of a happily ever after situation, either. Since discovering that her late husband Steve McDonald (Simon Gregson) fathered a baby behind her back too, she will be in for another shock when she finds out that Vicky is expecting Robert’s child. That is, if Tyler doesn’t do something about Robert first. He is going to be hot on Robert’s heels while he prepares to make his big move against him.

Vicky admits to Tyler that she is pregnant!

Vicky Jeffries Will Tell Her Son Tyler Jeffries About The Affair

Coronation Street spoilers indicate that Vicky will tell her son Tyler what had happened between her and Robert and needless to say, he is going to explode with rage. The troublesome teen will decide to take matters into his own hands and will try to settle the score with Robert. Of course, Michelle has no idea that all of this is going on as she is trying to work things out with Robert.

Seeing how actress Kym Marsh is leaving Coronation Street soon, there’s a very good chance that both Michelle and Robert might have very dramatic exits in the coming weeks. There’s a strong possibility that someone will survive, and someone won’t. Needless to say, fans will have to tune in to find out what will happen next!