Days Of Our Lives Spoilers: Gabi And Kate Sense Something’s Off With “Nicole” – Kate Snoops For Clues 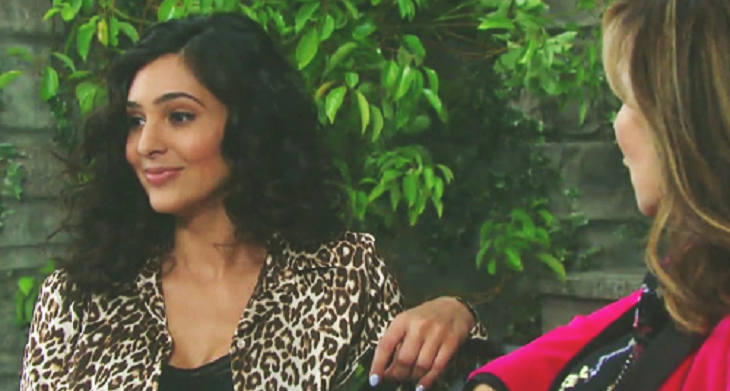 Days of Our Lives (DOOL) spoilers tease that Gabi Hernandez (Camila Banus) and Kate DiMera (Lauren Koslow) will be teaming up for another mission. These ladies have been quite a duo in the past.

They’ve teamed up to gaslight Abigail DiMera (Kate Mansi) and more recently they’ve conspired to bring down Stefan DiMera (Brandon Barash). But they’ll soon get distracted from that mission after they notice something strange.

So far, Kristen DiMera (Stacy Haiduk) has been very successful in her quest to impersonate Nicole Walker (Arianne Zucker) around Salem. She’s managed to convince everyone – including Nicole’s true love Eric Brady (Greg Vaughan) – that she’s Nicole in the flesh. She had a close call when a drunk Maggie Kiriakis (Suzanne Rogers) showed up at her door, but she managed to get out of it.

Days Of Our Lives Spoilers – Downfall Due To Bizarre Behavior?

But Kristen’s one downfall may be her bizarre behavior. In recent days, she’s had a rather tough time pretending to be Nicole, and she even let some characteristic “Kristen” behavior and talk slip while she was in the DiMera mansion talking to Stefano DiMera’s (Joseph Mascolo) portrait. Kristen thought she was alone, but Gabi happened to overhear her, and an interesting interaction ensued.

Gabi learned from “Nicole” that Stefan was reviving Basic Black for DiMera Enterprises, and that made Gabi worry a bit about the future of GabiChic. Gabi doesn’t want anything to happen to her beloved company, plus she’d probably prefer for Nicole to be far away from Stefan as possible.

Well, it seems that Gabi will take her observations back to co-conspirator Kate, and Kate will get interested in why Nicole would want to get involved with DiMera Enterprises so soon after Holly Jonas’ (Harlow and Scarlett Mallory) death. Something about the whole thing just won’t seem right to Kate or to Gabi, and so they’ll decide to find out what’s going on.

According to Days of Our Lives spoilers, Kate will go into sleuth mode, and she’ll take it upon herself to bust into “Nicole’s” room at the Salem Inn and do some snooping around.

Now, Kristen tends to be pretty careful, so Kate probably won’t find anything that screams “Kristen” or gives away the fact that Nicole really isn’t Nicole, but she might find some things that don’t make sense.

Exactly what Kate finds remains to be seen, but chances are, she’ll find something that leads herself and Gabi to really question “Nicole’s” motives. What do you think Kate will find?