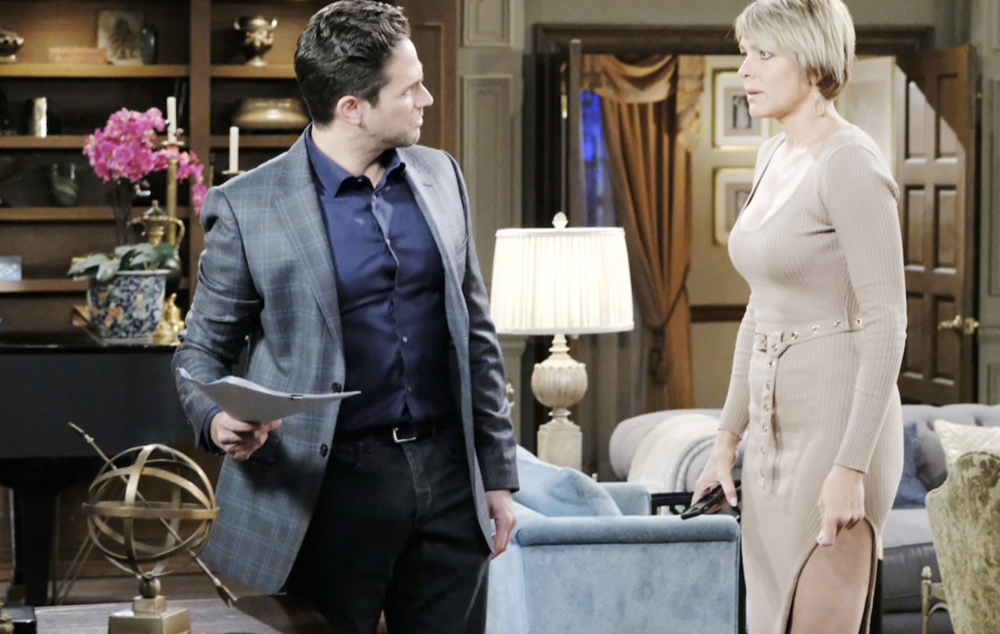 Ted Laurent Tried To Be A Hero

As Days of Our Lives viewers will recall from Friday’s episode, Ted, trying to be the hero in Hope Brady’s (Kristian Alfonso) eyes, went up in Xander Kiriakis’ (Paul Telfer) room at the Kiriakis Mansion while he was in the closed living room giving Dr. Wilhelm Rolf’s (William Utay) diary to Maggie Kiriakis (Suzanne Rogers) and Sarah Horton (Linsey Godfrey) as Brady Black (Eric Martsolf) looked on. He retrieved the correct autopsy paperwork on Holly Jonas (Scarlett and Harlow Mallory) that Xander had previously switched out when he was caught in the hospital where he shouldn’t be by Rex Brady (Kyle Lowder).

Ted then went to the DiMera mansion with the paperwork, calling Hope and leaving a message that he had good news for Nicole, but had to go tell her first before telling Hope, and he would find her after telling Nicole. He was in the mansion telling “Nicole” the good news when he called and left Hope the message.

The only problem is, Ted didn’t know Nicole wasn’t Nicole, and that she is really Kristen DiMera in a Nicole mask, and the last person he should have told! She knocked him out with a fireplace poker at the end of Friday’s episode, and it sounds like the scene will continue on Monday with Stefan and Abe, who’s there about the CCO job Stefan offered him, will be on their way into the living room!

Kristen will probably have no other choice than to try to get Ted into the secret room that leads to the tunnels, but she’ll have to do it very quickly to avoid being spotted by Stefan or Abe! Thankfully for herself, she managed to get a nosy Gabi Hernandez (Camila Banus) out of the mansion before she could see what happened as well.

Ted’s a good sized man, and even though Kristen is a big gal herself, she still may have trouble pulling the dead weight of an unconscious Ted where he won’t be seen or heard if he should come to while Stefan and Abe are in earshot or where he or part of him could be seen; so the secret room is her only chance! She will order Xander to dispose of Ted permanently later in the week, but will Ted come to after a blow to the head like that? Time will tell; stay tuned to Days of Our Lives and keep checking Days of Our Lives spoilers frequently for the latest news, updates and developments!

Be sure to tune into NBC’s Days of Our Lives (DOOL) on Monday, June 17 to catch up on all the excitement happening right now in Salem.  Check Celebrating the Soaps often for updates, news, rumors, and spoilers!