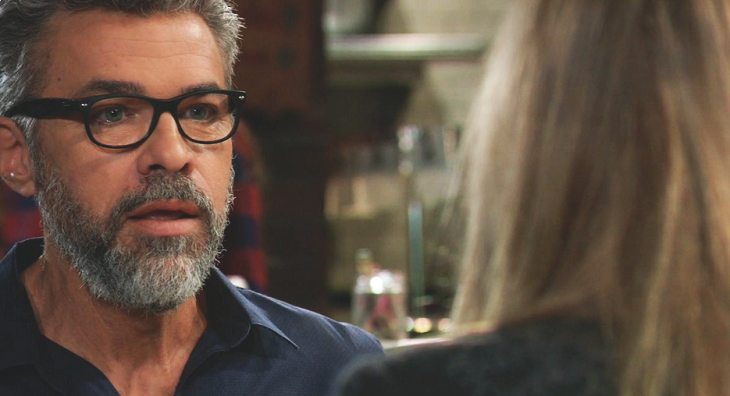 Valentin has a proposal for Jax. Valentin wants to buy Jax’s part of Aurora, but he refuses to sell. Jax wants to remain in town to spend the next two years with Jocelyn Jacks (Eden McCoy). Jax doesn’t want to keep Crimson because of Nina and tries to set Valentin’s mind at ease. He admits that he doesn’t like Jax and says he’s coming between them.

Valentin says there is no way to bargain with Jax. Valentin wants to marry Nina now not in three months. Nina doesn’t want Valentin as a boss; she needs him to stay out of this. Nina wants their marriage to be about the family they always wanted with no secrets between them.

Curtis tells Jordan he has spoken to the billing department and made payment arrangements. Drew arrives and wants to pay Jordan’s bills – they refuse to let him. Drew offers Curtis a job at Aurora. Curtis leaves, and Jordan wants to know how Drew is doing. Meanwhile, Valentin calls Curtis and wants him to investigate Jax. Jordan apologizes to Drew for not being there for him the past few weeks. Drew and Jordan talk about Oscar, he says it’s nice to be able to talk about how Oscar was instead of about his death.

General Hospital’s Maxie West (Kristen Storms) is talking to Mac Scorpio (John J. York) about Peter August’s (Wes Ramsey) birthday party. Laura Webber (Genie Francis) interrupts and tells Mac she has a favor to ask. Maxie joins Peter, who is eating pie for dessert and is shocked that he prefers pie over cake. She has to meet Lulu and leaves. Lulu Falconeri (Emme Rylan) and Felicia Scorpio (Kristina Wagner) are setting up the Floating Rib for Peter’s birthday party. Maxie arrives and is very nervous telling them ninjas and pie would have been better choices.

General Hospital’s Laura tells Mac she needs a temporary police commissioner. Mac agrees and can start tomorrow. Peter joins Mac and figures out that Maxie has planned a surprise party, Mac talks Peter into going although he wants to skip the party. Finn arrives and invites Peter to the Floating Rib for lunch, and Peter agrees, letting Finn know that he knows about the party.

Mac, Peter, and Finn arrive together to a dark restaurant. Peter pretends to be surprised and thanks Maxie, no one has ever thrown him a party before this. Everyone toasts Peter for his birthday. Peter thanks Maxie for the party, it’s a good feeling to look around and see people who care about him. Maxie tells Peter to get used to it.

General Hospital’s Drew Cain (Billy Miller) drops Kim Nero (Tamara Braun) off at her place and leaves to go home. Julian Jerome (William DeVry) arrives as Drew is leaving with food and invite Drew to join them. Drew declines leaving Julian to comfort Kim. Julian tries to encourage Kim to eat. Kim doesn’t know who she is since she’s no longer Oscar Nero’s (Garren Stitt) mom. Kim tells Julian what she needs has been in front of her this whole time and asks Julian to make a baby with her.

General Hospital’s Josslyn Jacks (Eden McCoy) has a séance set up in Sonny Corinthos’ (Maurice Benard) kitchen. Cameron Webber (William Lipton) and Trina Robinson (Sydney Mikaya) join Jocelyn and Cam tries to talk her out of the séance. Josslyn starts the séance and Cam tells her Oscar would be laughing his ass off at this, Trina and Josslyn agree.

General Hospital Spoilers: Peter Turns To Mac For Help- Is It About Maxie Or To Find Dante? https://t.co/ITB3ViKhuf pic.twitter.com/ukzKyuWK9p

They talk about Oscar until there is a ripple in the water bowl on the table. Josslyn asks if it’s Oscar and goes outside, she doesn’t see anything. Trina thinks they are being together worked, that what Oscar wants is for her to be happy. Josslyn apologizes for wasting their night. Trina and Cameron leave after hugging Josslyn goodbye. Josslyn blows out the candles, and someone seems to be looking in the window.

Meanwhile, at GH, it looks like Jordan Ashford (Briana Nicole Henry) is taking a little longer to heal from her kidney transplant than was thought, as Curtis Ashford (Donnell Turner) continues to be by her side.