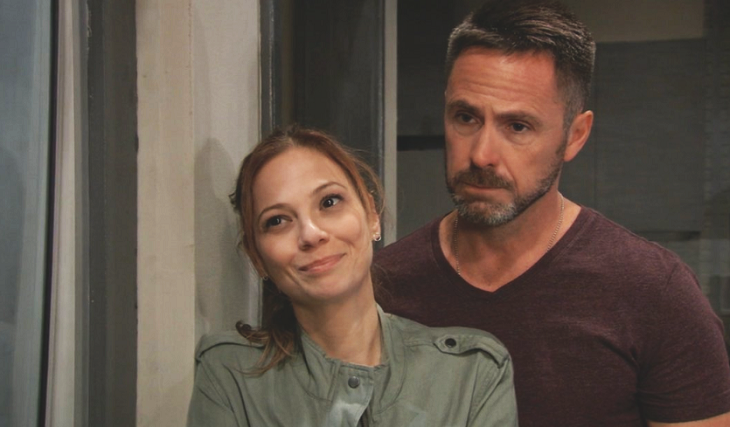 Meanwhile, Lulu Falconeri (Emme Rylan) will keep working on her story for The Invader. She’s reentered the dating game, but that’s only because she hopes to catch a thief!

However, Mac will question Peter’s judgment on this dangerous topic. He won’t agree that Peter should’ve let Lulu tackle it. Mac will also worry that Peter might let harm come to Maxie if this is his way of thinking.

Across town, Julian Jerome (William deVry) will gather his thoughts and respond to Kim Nero’s (Tamara Braun) plea. GH fans know Kim just asked Julian to make a baby with her, so he’ll have to wrap his head around that bombshell. Julian will indicate that it could be the best thing that ever happened to him, but he may clarify that it’s not the right time.

General Hospital Spoilers: Peter Turns To Mac For Help- Is It About Maxie Or To Find Dante? https://t.co/ITB3ViKhuf pic.twitter.com/ukzKyuWK9p

The last thing Kim should be doing right now is making a huge decision about her future. Julian might contend that Kim’s drowning in grief and in no shape to make a choice like this. Nevertheless, Kim’s desperate and will continue to long for another child.

Other “General Hospital” spoilers say Drew Cain (Billy Miller) will hear Margaux Dawson’s (Elizabeth Hendrickson) request. She’ll have a favor she needs from Drew, so he’ll listen up and fulfill it if he agrees it’s the right call. Since all roads lead to Shiloh right now, whatever Margaux asks for may involve the plot to take him down.

Over with Sonny Corinthos (Maurice Benard), he’ll face a problem that needs to be addressed quickly. As Sonny’s right-hand man, Jason Morgan (Steve Burton) should pitch in on this. There’s a good chance Sonny’s issue also involves Shiloh, so Jason should be motivated to fix things and rev up a new scheme against him.

Finally, “General Hospital” spoilers say Josslyn Jacks (Eden McCoy) get support from her mom. Carly Corinthos (Laura Wright) will encourage Joss to seek counseling, but will Josslyn go for the idea? She might begin to see the benefits if Carly pushes hard enough.

It looks like some great scenes are coming up. We’ll give you updates as other news and rumors emerge. Stay tuned to ABC’s GH and don’t forget to check Hollywood Hiccups often for the latest “General Hospital” spoilers, rumors, updates and news.