Coronation Street Spoilers: Chesney Races To Get Gemma To Hospital – Traumatic Labor And Delivery Ahead 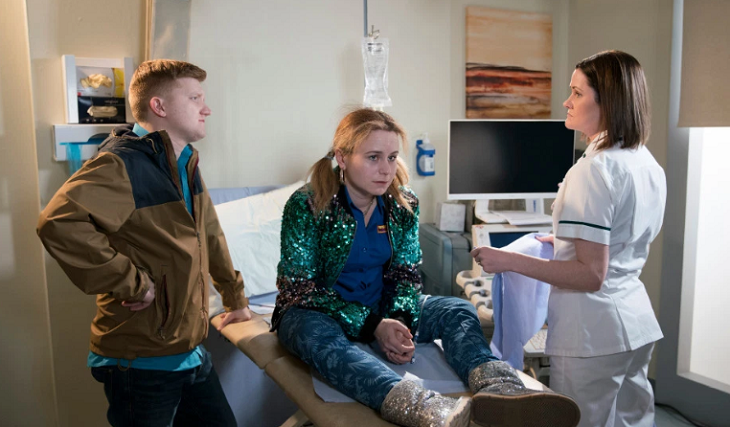 Coronation Street spoilers indicate that Gemma Winter (Dolly Rose Campbell) will soon be going into labor and unfortunately, it will be a terrifying scene that will keep fans on the edge of their seats.

As many viewers know, Gemma and her partner Chesney Brown (Sam Aston) are not just expecting one or two children. They are expected four babies! Here’s what you need to know.

Things haven’t been very easy on Gemma and Chesney, to say the least. The couple were recently told that there’s a very high chance that they might lose one of their babies. And while they know that the odds are stacked against them, both Gemma and Chesney said they want all of their four children to have an equal chance at survival.

To make matters worse, Chesney has been worried sick about the future after realizing that he doesn’t make enough money to support his new family. As a matter of fact, Coronation Street spoilers tease  Chesney will be having a very hard time making ends meet with his new family.

While it’s no secret that Gemma and Chesney have always had a very rocky relationship, this will definitely test them and their future together.

And if that weren’t enough, Gemma will now be going into labor while on a cable car 80 feet in the air. As if things couldn’t get any worse for them, Gemma’s labor and delivery will be a very risky one.

Gemma will be riding in a cable car in North Wales when her water decides to break at the worst time possible. It will be up to Chesney to race against the clock in order to get her to the hospital on time.

It has been a busy week on the Cobbles – what has got you talking? #Corrie pic.twitter.com/l2FpmDdfmi

One source close to Coronation Street behind the scenes even teased to Express.co.uk: “For Gemma to go into labor while riding a cable sums up that they haven’t had things easy. Fans will be delighted that it will be a happy ending.”

But what Gemma and Chesney will have to go through before that happy ending comes remains to be seen! Fans will have to tune in for sure!