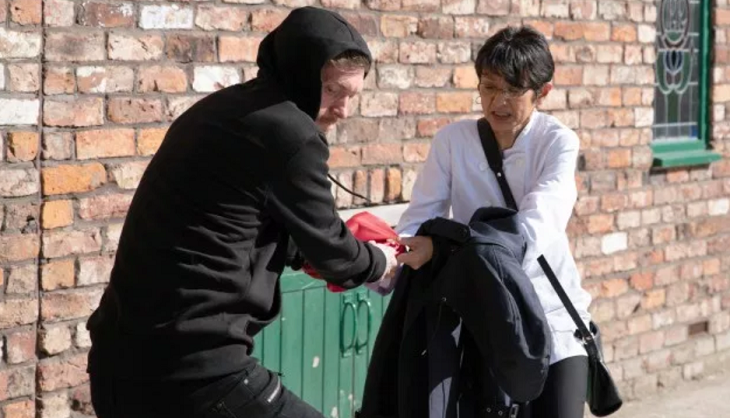 Coronation Street spoilers tease that Yasmeen Nazir (Shelley King) will find herself brutally attacked in scenes that will be difficult for some fans to watch. As a matter of fact, Yasmeen will find herself at the center of a harrowing storyline as she’s attacked by a mysterious person just outside of Speed Daal. Here’s what you need to know.

As many fans know, the last several years haven’t been easy for Yasmeen. Ever since she arrived in Weatherfield in 2014, she’s been at the center of some pretty dramatic storylines, including the demise of her own marriage.

Things went south after it was revealed that her husband Sharif Nazir (Marc Anwar) was having an affair behind her back with her best friend Sonia Rahman (Sudha Bhuchar). If that weren’t enough, she was also forced to take care of Alya (Sair Khan) following the brutal murder of Luke Britton (Dean Fagan).

Coronation Street Spoilers – Assailant Drags Her Down An Alley

As if things couldn’t get any worse for her, Yasmeen will be forced to fight back after getting attacked on the street and in broad daylight no less! This happens right after she has a night out with Cathy Matthews (Melanie Hill).

Despite feeling worse for wear, she went out with her friend as she needed to spend some time to relax and not think about her worries for awhile. Even though she would rather be at home, Yasmeen decided to take an extra shift at the restaurant.

But it’s a decision that she might soon end up regretting. That’s because she ends up getting brutally attacked after her assailant drags her down the nearby alleyway. He ends up taking her belongings and despite Yasmeen screaming for help, no one is around to help her.

Coronation Street Spoilers – Who Is Behind The Brutal Attack?

But here’s what fans can’t help but wonder: who is behind the attack and what is their motivation? Is there someone out there that has some beef with Yasmeen or are they simply looking for some fast cash?

PREVIEW PICTURES: Yasmeen is in danger! Gemma and Chesney go for their 12 week scan, Robert's lies start to catch up with him and will Steve get to celebrate his birthday!?

Either way, fans will find out soon enough. Yasmeen has a target on her back and she’s determined to find out who is out to get her!