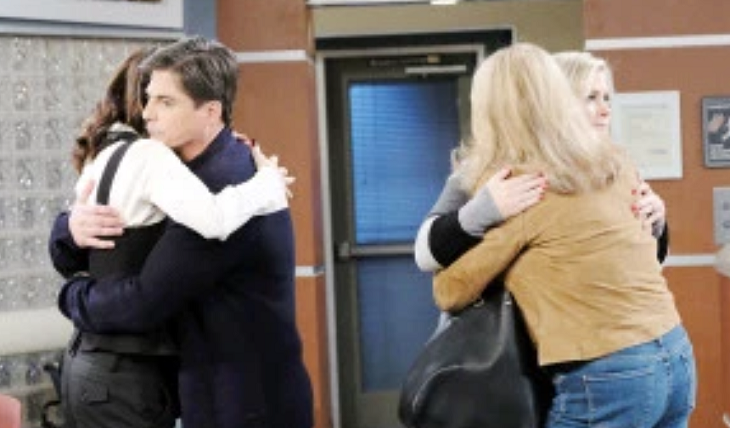 Days of Our Lives (DOOL) recap for Tuesday, June 18, 2019, reveals Stefan Dimera (Brandon Barash) hears the tunnel door close as he comes to give Nicole Walker (Arianne Zucker) her contract.

Gabi Hernandez (Camila Banus) comes to confront Stefan about hiring Nicole at Dimera. Stefan comforts Gabi as she breaks down over Will’s impending death. Stefan gets Gabi a drink and sits with her. Gabi tells Stefan that Ari Horton (Harper and Sydnee Udell) asked if Will dies, will come back this time. Gabi doesn’t want to face life without Will yet.

Days Of Our Lives Spoilers – Roman Brady Gets An Update

Days Of Our Lives Spoilers: Stefan Comforts A Distraught Gabi

Days of Our Lives Eve Deveraux (Kassie DePaiva) calls the hospital to check on Will Horton (Chandler Massey). Claire Brady (Olivia Rose Keegan) arrives to inform Eve that Ciara Brady (Victoria Konefal) doesn’t believe that Ben Weston (Robert Scott Wilson) is innocent and neither will anyone else. Eve tells Claire she has to throw Tripp Dalton (Lucas Adams) under the bus to take Ben down.

Eve needs Claire to make a statement against Ben that could incriminate Tripp as well. Claire tells Eve that Tripp was planning to run away with Haley Chen (Thia Megia), J.J. Deveraux (Casey Moss) was a smoke screen. Eve suggests Claire needs to speak with someone. Claire will give Eve the statement she needs, but she cannot use it against Tripp. Eve promises to get Ben no matter what.

Days Of Our Lives Spoilers – Lucas Horton Blames Himself

Days of Our Lives Marlena Evans (Deidre Hall) is with Will and Sonny Kiriakis (Freddie Smith). Will thanks Marlena for marrying them. Marlena leaves and gives Will and Sonny time alone. Sonny knows things will be ok this time. Sonny pops the cork on their champagne and wants to make a toast. Sonny assures Will that he is not giving up on a cure. Will wants to toast to everything they have to be thankful for at this moment.

Sonny has faith that they will get through this trial as well; Will says they will always have their wedding day no matter how long forever is. Lucas credits Will for being sober today. Will makes Lucas promise not to start drinking again if he dies. Lucas and Will hug and Lucas apologizes for breaking down. Will tells Sami he doesn’t like what this is doing to the people he loves. Sami tells Will she needs to fix this. Sonny comes in and is talking to Will when he collapses, and his monitors begin to scream.

Days Of Our Lives Spoilers – Ciary Brady Wants A Confession

Tripp says Claire knew it was a business arrangement. Tripp figures out that Claire might have wanted to kill him but asks why he would want to kill Ciara. Ciara tells Tripp that she turned on her phone right before the fire and Claire knew how to track it on the internet.

Ciara tells Tripp that Claire is sicker than they know. She says there is one thing they can do, and that is to get Claire to confess. Tripp asks how they are supposed to get a confession. Ciara says Claire needs help and begs Tripp to help her.

Days of Our Lives Sonny goes into the hallway and calls his parents. Roman joins Sonny and asks how he is doing. Sonny says this is his wedding day and he should be looking at a long life ahead of them. Lucas comes into the hallway as well and talks to Kate. Lucas blames himself for letting Will down. Kate respects Lucas as a father. Sami goes after Kayla; Roman stops her from getting into the lab.

Be sure to tune into NBC’s Days of Our Lives (DOOL) to catch up on all the excitement happening right now in Salem.  Check Hollywood Hiccups often for updates, news, rumors, and spoilers!