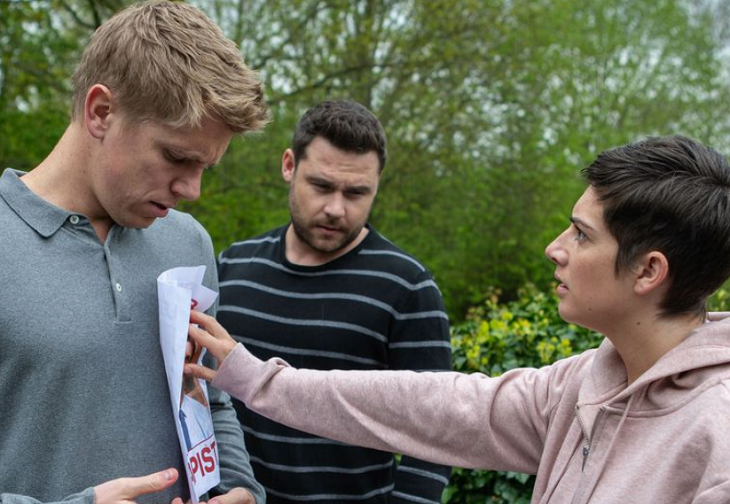 On “Emmerdale,” Victoria Barton (Isabel Hodgins) will cut ties with her brother in the wake of his disastrous revenge plot against Lee Posner (Kris Mochrie), the man who raped her.

Victoria has had enough and will turn her back on Robert Sugden (Ryan Hawley) after his actions resulted in her being questioned by the police.

Things turned for the worse when Robert didn’t do anything to clear Victoria’s name after she was falsely accused of harassment. Aaron Dingle (Danny Miller) will try to build bridges between the siblings but will the two patch things up?

Victoria’s rape storyline began in April, when she was raped by fellow clubber Lee after a night out. She tried to hide it at first but eventually told the police about the assault.

Has Robert & Aaron’s poster stunt made things even worse for Victoria? #Emmerdale pic.twitter.com/EwH6rGejwX

Since then, Victoria found out that she was pregnant with her rapist’s baby and that the police decided to drop the investigation due to lack of evidence. Despite all that, Victoria decided to keep her baby, a decision that  Robert can’t seem to come to terms with.

Frustrated and determined to make Lee pay for what he has done, Robert tried to trick Lee into making a confession. Robert, along with Aaron, went to the car dealership where Lee worked. During a test drive, Robert asked him a lot of questions, particularly about his love life and women.

Still unable to get a confession, Robert stopped the car and revealed that he is the brother of the woman he raped and demanded that he confess his crime. However, Lee denied his accusations and threatened to go to the police if he goes near him again.

This didn’t stop Robert. He hatched another plan to ruin Lee’s reputation and destroy him. He put up posters with Lee’s face and the word rapist printed on them. When Victoria discovered what her brother had done, she demanded that he remove the posters.

Despite Victoria’s effort to stop Robert, she ended up taking the blame for what he did. Lee accused her of harassment and sent the police at Mill Cottage to ask her about the incident. Although the police eventually went their way, Victoria was left hurt and disappointed when Robert didn’t do anything to clear her name.