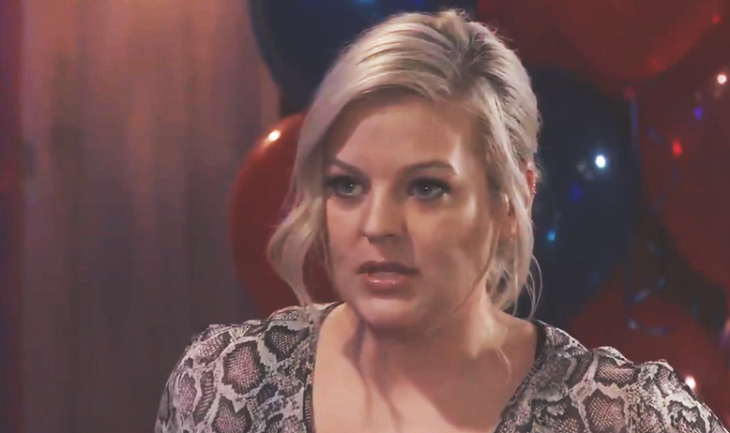 General Hospital spoilers tease that Maxie Jones (Kirsten Storms) will get a lead on Dante Falconeri’s (Dominic Zamprogna) whereabouts. She and Peter August (Wes Ramsey) haven’t gone overseas just yet, they haven’t even gone to Berkeley to see Robin Scorpio-Drake (Kimberly McCullough) yet.

Perhaps when Peter asked Mac Scorpio (John J. York) for some help on Monday’s episode, the subject came up and he referred him to his brother Robert Scorpio (Tristan Rogers) and Maxie got the lead from Robert.

It’s also possible that Maxie got the lead from her father Frisco Jones (Jack Wagner), although it’s highly unlikely, since he is the king of family avoiders! She has to have gotten the lead from someone, unless Damian Spinelli (Bradford Anderson) taught her how to hack in the WSB computer.

General Hospital Spoilers – Will She Track The Lead In Person?

A facility for un-brainwashing spies isn’t something someone can find in a Google search or even a Spyder-Finder search as usually shows up on General Hospital computers. Maybe she asked for Spinelli’s help and he sent her the lead, since he doesn’t appear to be in Port Charles at the moment.

Nevertheless, Maxie has a lead and she will want to follow it, even if it means flying overseas and tracking it down in person! Wherever Dante is there is no guarantee that he can get emails or text messages, and Lulu Falconeri (Emme Rylan) has undoubtedly already tried that method with no luck.

Peter won’t want her traipsing about overseas in unfamiliar and possibly dangerous territory by herself, and it seems where Maxie or Lulu go, trouble follows, so Peter will follow as well!

As Lulu discussed with her father in law Sonny Corinthos (Maurice Benard) in a recent episode, Dante didn’t want Lulu to wait on him to return. But what no one understands, because Dante didn’t want them to know, is Dante didn’t trust himself with Lulu because the brainwashing kept telling him to complete the mission, with the mission being killing Lulu!

General Hospital Spoilers: Lulu Misreads A Situation — Does It Have To Do With Dante’s Whereabouts? https://t.co/H13mNp5yTP pic.twitter.com/3YyViqdreI

He didn’t know if he would ever be normal and not have to fight these brainwashing urges again. Dante didn’t even go into detail when he sought help from Anna Devane (Finola Hughes). If he’d at least told Sonny the whole story, then Maxie wouldn’t be trying to take trips to find him and get him and Lulu back together!