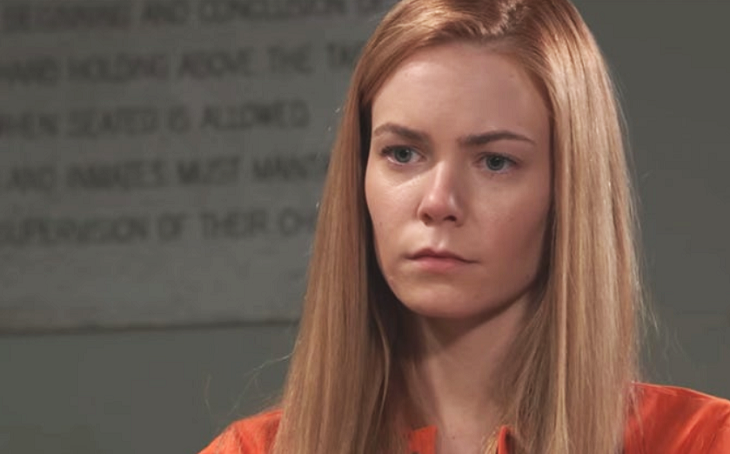 General Hospital (GH) spoilers tease that Nelle Bensen (Chloe Lanier) returned to the canvas last week and it might be time the truth comes out about Wiley.

At this point in the storyline, Willow Tait (Katelyn MacMullen) thinks Wiley is she and Shiloh Archer’s (Coby Ryan McLaughlin) baby boy.

Willow has no clue that her baby died and Nelle convinced Brad Cooper (Parry Shen) to switch the babies to keep the Corinthos’ family away from her child. Here’s what Chloe Lanier had to say about Nelle’s return and if she would fess up to the baby swap.

To say that Nelle teaming up with Ryan Chamberlain (Jon Lindstrom) is concerning, would be a huge understatement. The two of them will be dangerous and unpredictable. General Hospital spoilers state that Chloe was stunned when she learned that Nelle would strike up a partnership with serial killer Ryan.

As for what kind of trouble is ahead for Nelle and Ryan, Lanier wasn’t sure. She said she only knows what GH gives her and currently, there’s not much information to go on. In other words, she is in the dark just as much as everyone else. And, she added, she cannot wait to see how it all plays out.

One thing that Nelle did ask Brad last week was if Michael Corinthos (Chad Duell) missed her. Of course, Brad wasn’t sure how Michael felt about her, but Nelle seemed to be holding on the hope that he still loved her.

The real time-bomb seems to be the Wiley reveal. With Shiloh closing in on finding out that Willow put their child up for adoption, Nelle may have to reveal the truth to protect her son from Shiloh. And, Lanier said that there is nothing that Nelle wouldn’t do to keep her baby safe.

The real question is, how will Willow and Michael react to the truth? Will Michael want to raise his son or let Brad and Lucas Jones (Ryan Carnes) raise his son Jonah?