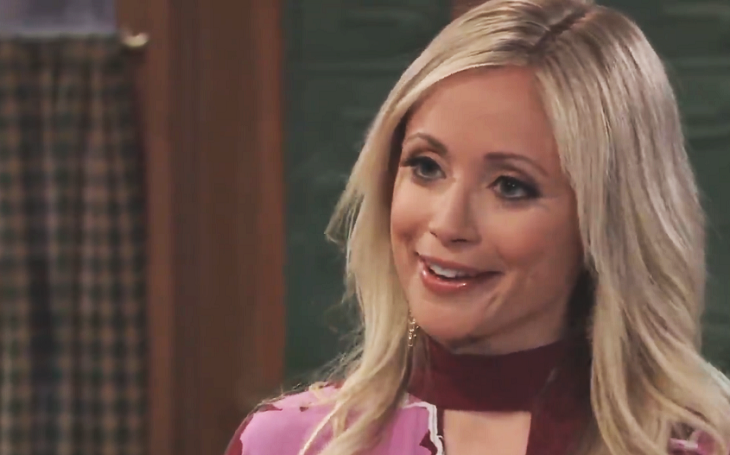 Sonny puts Avery Corinthos (Ava and Grace Scarola) to bed and goes with Rocco to watch the ballgame. Carly sees the séance material and asks Josslyn if they were able to connect with Oscar. Lulu tells Carly she is doing what Oscar told her, but she only feels how much she misses Oscar. Oscar tells Carly and Sonny about thinking she heard footsteps outside. Josslyn says she should have known this wouldn’t work. Josslyn talks about her conversation with Trina Robinson (Sydney Mikaya) and Cameron Webber (William Lipton).

Rocco comes back and tells Sonny about the game score and wonders if his dad knows. Sonny is sure he does and offers to make Rocco waffles with whipped cream and takes him to his room. Carly suggests that Josslyn try counseling. Sonny comes in and says they have a problem. Carly tells Sonny there could be a problem with the baby. Carly tells Sonny she has to have more testing, Sonny asks what they are trying to rule out. Sonny tells Carly that whatever happens, they will face it together.

General Hospital’s Kim Nero (Tamara Braun) wants to have a baby with Julian Jerome (William DeVry). Kim needs to be a mother again, and Julian can be there from the beginning with his child. Julian says it could be nice to be there from the beginning and not jump through hoops to see his child. Julian tells Kim he would love to do this with her, but he refuses to give her what she wants. Kim asks Julian why he is turning her down if it would be a dream come true. Julian tells Kim that she’s not ready to take this step yet, she wants Oscar back, and no baby will ever be Oscar.

Julian tells Kim to take some time, and maybe they can revisit this conversation later. Kim doesn’t hate Julian; he is right. Julian tells Kim about the fight over Wiley Cooper-Jones (Theo and Erik Olson). Julian tells Kim about teaming up with Sam to help keep Wiley safe. He invites Kim to go with him to close up the pub; she refuses. Julian wants to talk more about a baby when she gets through the grief. Kim says she has to face the emptiness of the house without Oscar. Kim looks at a photo of Drew, Oscar, and herself.

General Hospital’s Margaux Dawson (Elizabeth Hendrickson) goes to visit Jordan Ashford (Briana Nicole Henry) and runs into Drew Cain (Billy Miller). Margaux tells Drew she is living town and probably won’t see him again. Margaux apologizes to Drew and tells him how she got wrapped up in DOD. Margaux talks about how mixed up she got in DOD and trying to take down Sonny. Margaux tells Drew she enjoyed his company but let ambition get in the way.

Drew tells Kim that the flash drive is locked up at Aurora. Someone at the desk is listening as Drew tells Margaux the location. Drew understands why Margaux did what she did. He forgives Margaux if that helps her. Margaux asks Drew about his relationship with Shiloh Archer (Coby Ryan McLaughlin).

Margaux asks Drew is Shiloh ever inquired about the flash drive, she thinks he has a vested interest in Drew’s memory. Margaux and Drew decide that Shiloh is fishing for information from his past. Drew tells Margaux about his trip to scatter Oscar’s ashes and tells her goodbye.

General Hospital’s Mac Scorpio (John J. York) tells everyone at Peter August’s (Wes Ramsey) party that he is acting police commissioner. Lulu Falconeri (Emme Rylan) tells Mac about the article she is working on and confronts Peter about signing off on this.

Hamilton Finn (Michael Easton) points out that the WSB is not going to make Dante easy to find. Robert Scorpio (Tristan Rogers) arrives and asks what he has to do to get a drink. Robert tells everyone the WSB is forcing him to retire. Maxie asks Robert if he knows where Dante is, he says he does. Robert cannot tell them where Dante is; he needs to heal. Felicia tells Maxie she needs to let this go for now. Maxie goes to call Lulu and Maxie overhears Dante’s location. Maxie tells Peter she knows where Dante is.

General Hospital Spoilers: Lulu Misreads A Situation — Does It Have To Do With Dante’s Whereabouts? https://t.co/H13mNp5yTP pic.twitter.com/3YyViqdreI

General Hospital’s Lulu is at Kelly’s to meet her date. A man walks in and joins Lulu, but he’s not the guy from the dating app. Lulu calls the guard off the house being she knows this. Rocco wants his baseball glove, and Sonny offers to send Josslyn with a guard.