General Hospital Spoilers: Will Julian And Sam Team Up Again To Take Down Shiloh? 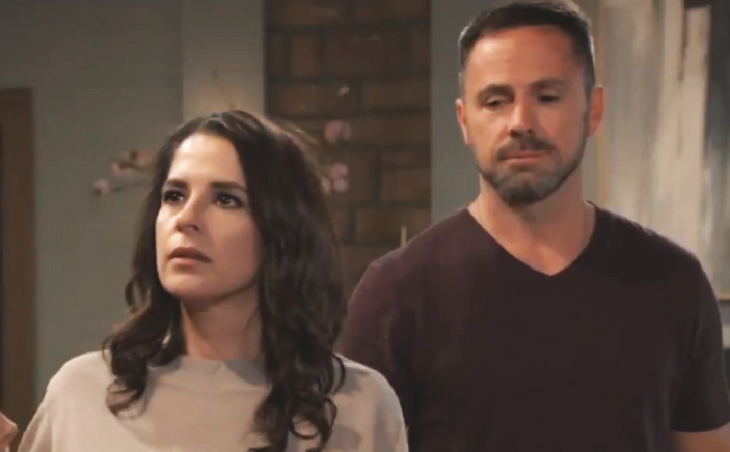 General Hospital spoilers tease that Julian Jerome (William DeVry) will be propositioned. Who will proposition him and what kind of proposition might it be? In General Hospital previews for Monday’s episode, his girlfriend Kim Nero (Tamara Braun) is back from Mount Kilimanjaro, where she and Drew Cain (Billy Miller) scattered their son Oscar Nero Quartermaine’s (Garren Lake Stitt) ashes.

She had fainted, patted her stomach and talked about a baby brother or sister; but she wouldn’t have to proposition Julian for sex – they are already involved. And it would seem if she wanted to get pregnant it would be by Drew, so Oscar could have a full sibling instead of a half-sibling. Julian probably wouldn’t take that too well.

Other General Hospital spoilers tease that Kim could already be pregnant, although not very far along. Could she be trying to get Julian into bed because it might be Drew’s? That doesn’t make sense either, if she wants Oscar to have a little full sibling. She does, however tell Julian that she doesn’t know who she is anymore, and that could mean she doesn’t know how not to be a mom.

So if that is not the kind of proposition General Hospital is talking about, who else could be propositioning Julian about something and what would it be? On Friday’s episode, Margaux Dawson (Elizabeth Hendrickson) gave Jason Morgan (Steve Burton) an investigation job to do at the Beechers’ Corners Dawn of Day house.

She told him that he might find proof of Shiloh Archer (Coby Ryan McLaughlin) having murdered a former member with drugs, named Douglas Miller, but that a disciple took the rap. This sounds like it could have been Harmony Miller’s (Inga Cadranel) husband and Willow Tait’s (Katelyn MacMullen) father.

Harmony is currently in Pentonville, but someone else could recognize Jason if he went over there. Could this be another job for budding father and daughter sleuth team Julian and Sam McCall (Kelly Monaco)?

Sam hasn’t been seen by anyone there except Harmony, and she’s in prison. Curtis Ashford (Donnell Turner) is busy with his wife Jordan Ashford’s (Briana Nicole Henry) recovery, and Damian Spinelli (Bradford Anderson) may not be available, and Jason won’t want Sam going in by herself.

So Julian might be an option, and Jason and Sam might proposition him to go with Sam. Of course, there’s still Kim needing his support also but Drew should be back and he will be more than willing to pitch in there.